The Berbers -- descendants of pre-Arab populations across North Africa -- are currently celebrating their New Year festivities.

On Friday — for the first time — the Yennayer New Year is being marked as a national holiday in Algeria.

The Berbers, who refer to themselves as the Amazigh, have long fought for greater recognition for their ancient ethnic group, their culture and language.

In Algeria they make up roughly a quarter of the country’s total population of 40 million and live mainly in the mountainous northern region of Kabylie.

Here is some background on other Berber communities that have stretched across North Africa since long before the Arab conquests:

On Africa’s northwestern tip, Morocco is the country with the largest Berber community in the region. Their language — of which there are three main dialects — was only given official status alongside Arabic in a new constitution in 2011.

One of the major consequences of this recognition has been the appearance of their Tifinagh alphabet on public buildings next to Arabic and French.

Since 2010 the Tamazight TV channel has been dedicated to promoting Berber culture.

Legislation currently under consideration by the government would diversify teaching in school to help bolster their language.

Several years back lawmakers created a major stir by talking in the Berber language in parliamentary sessions.

Despite advances, the Moroccan authorities still sporadically refuse to register Berber names on the official registry.

The Amazigh flag was a major symbol in protests that hit the depressed Rif region in the north of the country last year, where the group is a majority.

The Berbers in Morocco have long called for their New Year to be marked as national holidays like its equivalents in the Muslim lunar and gregorian calendar.

Persecuted under dictator Moamer Kadhafi, who denied their existence, the Berbers of Libya have called for their language be given official status and for greater political representation.

They make up around 10 percent of the 6.4 million and live mainly in the mountains west of Tripoli or in the vast desert regions.

Their demands have become more vocal in the turmoil-wracked country since Kadhafi’s ouster and death in 2011. The Berber flag can now been seen on administrative buildings. 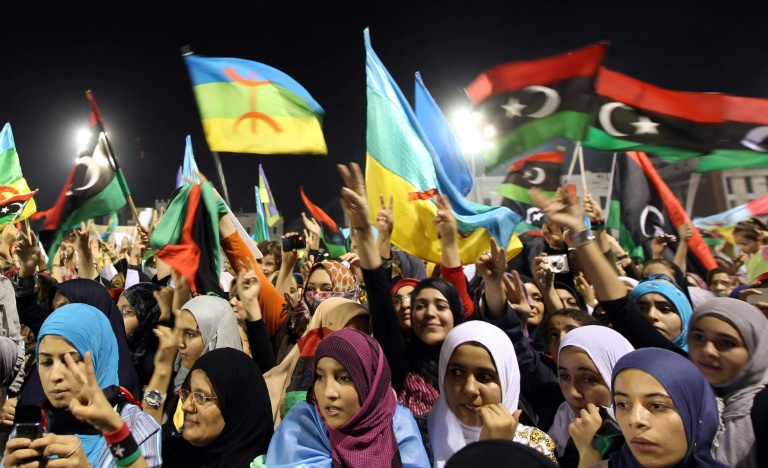 Libyan women wave their new national flag and the flag of the Berber during an Amazigh festival in Tripoli on September 27, 2011

Textbooks in their language have also been produced but they have not been officially approved by the internationally backed government.

Under a draft constitution endorsed by parliament, but still awaiting ratification in a referendum, the languages spoken by the various communities, including Tamazigh, are recognised as part of Libyan cultural heritage but not given official status.

In Tunisia estimating the number of Berbers is tough as official statistics based on ethnicity are prohibited. 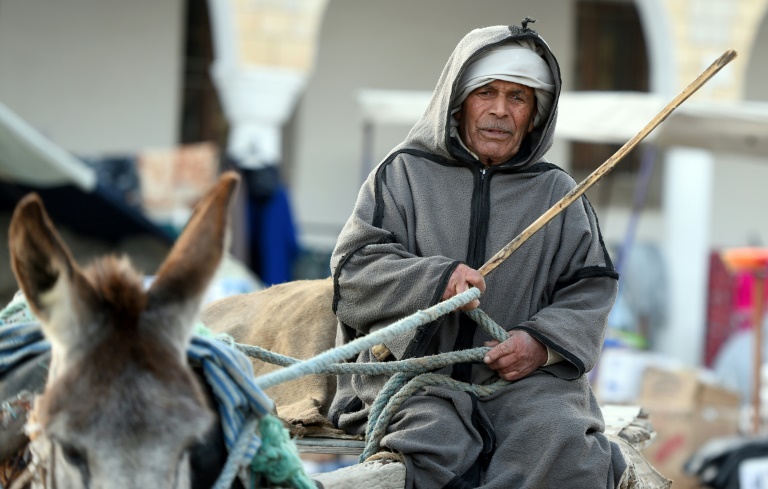 A Berber man dressed in traditional clothes rides a donkey-pulled-cart in the Tunisian town of Ben Guerdane on February 6, 2016

Outside their traditional heartland in the south, Berbers are mainly found in the capital Tunis following an exodus from the countryside.

They complain of marginalisation and exclusion in a state that recognises only Arabic in its constitution.

Jallol Ghaki, the head of the Tunisian Association of Amazigh Culture, estimates that while some half of Tunisians may be of Berber origin, the vast majority have been fully Arabised and only one percent speak the local Chelha dialect.

While activists complain that the state takes no efforts to preserve or educate children about Berber culture, there have been some improvements since Tunisia’s 2011 revolution.

Media and civil society has opened up and in 2017 the minister for human rights in the country marked the Yennayer festivities by wishing the Berber community a Happy New Year.