'I decided to personally come and inform you that I am stepping down as prime minister of Lesotho,' Thabane told supporters in his Abia home constituency. 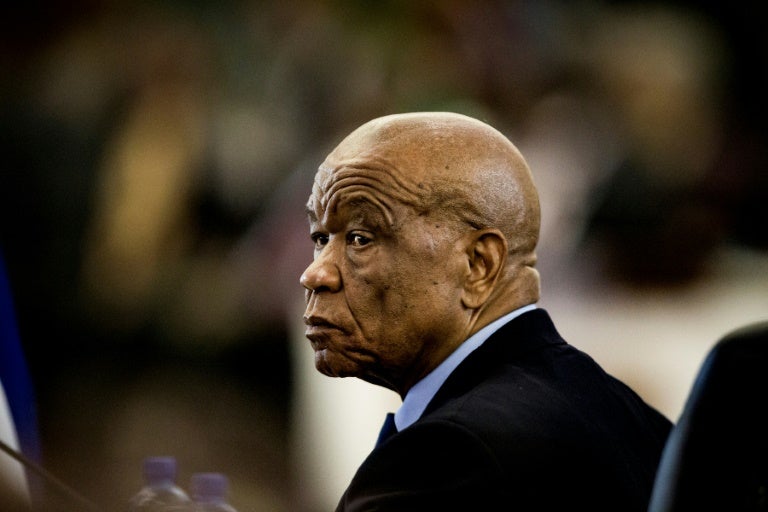 Prime Minister Thomas Thabane is accused of having a hand in the 2017 murder of his estranged wife . AFP/File/GULSHAN KHAN

Lesotho’s embattled Prime Minister Thomas Thabane announced his resignation on Monday, ending months of political uncertainty gripping the kingdom since he was accused of participating in his ex-wife’s murder.

Thabane’s political rivals have piled pressure on the prime minister to step down early over allegations he had a hand in the brutal 2017 shooting of Lipolelo Thabane, whom he was divorcing.

His coalition was disbanded in parliament last week and he had been expected to resign by May 22, when a new government is due to be installed.

“I decided to personally come and inform you that I am stepping down as prime minister of Lesotho,” Thabane told supporters in his Abia home constituency on the outskirts of the capital Maseru.

The 80-year-old did not state when he would officially quit and clarified that he would remain leader of his ruling All Basotho Convention (ABC) party for the time being.

“It is rather difficult to part ways with something that you had been accustomed to and leave people behind, but we all have to leave at some point,” he added.

Thabane, whose elected term is due to end in 2022, had in January set himself a target of leaving office by July 31 because of his advanced age.

But Lesotho has been plagued by political instability since the start of this year, when police found Thabane’s mobile number in communications records from the crime scene of his estranged wife’s murder.

The alleged evidence prompted rivals within and outside Thabane’s party to demand his immediate resignation.

Lipolelo Thabane, 58, was shot and killed outside her home two days before her husband’s inauguration in July.

The murder sent shock waves through Lesotho — a tiny landlocked nation of 2.2 million with a history of political turmoil.

Thabane has denied involvement in the killing.

His current wife Maesaiah Thabane, 43, whom he married two months after Lipolelo’s death is considered a co-conspirator in the murder case.

She has already been charged with murder and is out on bail.

Thabane’s government collapsed after his coalition partners pulled out over his repeated refusal to leave office earlier than stated, claiming he was tying up loose ends to ensure his retirement was “as smooth as possible”.

“Majoro will be sworn in as his successor tomorrow at 10am (0800 GMT),” said the ABC spokesman Montoeli Masoetsa.

“Whether he gave an exact date of stepping down or not isn’t a real issue, the real issue is that he ceases to be a prime minister today,” he added.

The party’s national executive committee is expected to hold a special conference in July to elect a new leader.

While no premier has served out a full five-year term in Lesotho over the past decade, the octogenarian Thabane boasted in an interview with AFP last week that he has set an example to fellow African leaders who have the propensity to cling to power.

“I’m trying to set a precedent that leaders in Africa must volunteer to leave when they think it’s time to leave or at the very worst they must leave when their term ends.”