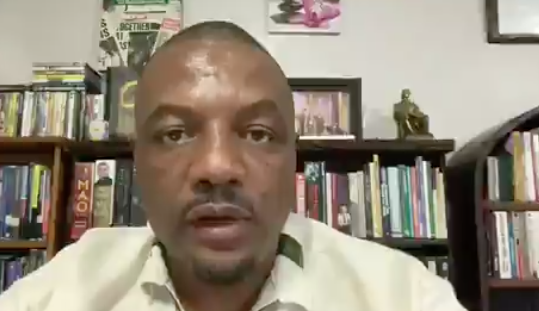 The South African National Editors’ Forum (Sanef) has called on police in Zimbabwe “to stop the relentless intimidation and harassment of journalist Hopewell Chin’ono”, who on Friday was arrested for the third time “for doing his job”.

“We call for his unconditional and immediate release,” Sanef  said in a statement on Saturday.

According to the statement, Chin’ono tweeted upon his arrest: “They say they are charging me with communicating falsehoods for tweeting that a child had been beaten up and died by a police officer! They are taking me to the Law-and-order section at Harare Central Police Station.”

They say they are charging me with communicating falsehoods for tweeting that a child had been beaten up and died by a police officer! They are taking me to the Law and a order section at Harare Central Police Station.

Chin’ono was among many Zimbabweans who tweeted about the incident, demanding answers.

In response, the police offered a different version of events in a statement.

Chin’ono was first arrested in July on charges of inciting violent anti-government protests. He was arrested again in November on charges of obstructing justice.

The multiple award-winning freelance journalist and documentary filmmaker, who works mostly for British and SA broadcasters was freed on bail awaiting trial for both cases. Chin’ono is a critic of President Emmerson Mnangagwa’s rule. He has a large social media following and has helped expose corruption involving Covid-19 funding.

“Sanef believes that this hostile environment is a direct attack on freedom of expression.”

The forum also noted “the blatant sexist and misogynistic vitriol” from Zimbabwe’s Director of Information and Publicity, Tafadzwa Tuboy Mugwadi, directed to SABC Foreign Editor Sophie Mokoena “in a bid to intimidate, harass and stop her from doing her job of reporting on Zimbabwe and the continent”.

“Mugwadi seems to have taken it personally that Mokoena asked tough questions about the whereabouts of Zimbabwe President Emmerson Mnangagwa amid the Coronavirus crisis in the country.

“Sanef advises both Mugwadi and the ZANU-PF to direct their complaint, if any, about Mokoena’s reporting to the SABC management and the Broadcasting Complaints Commission of South Africa (BCCSA).”