A coalition of armed rebel groups have been accused of an attempted coup. 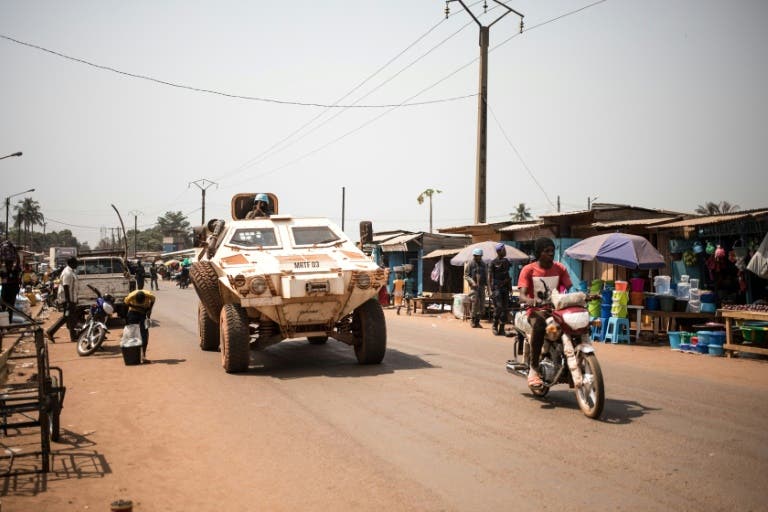 Members of the UN peacekeeping mission in the Central African Republic (MINUSCA) are seen patrolling in Bangui in January 2020 -- UN Secretary General Antonio Guterres has said he sees "progress" on political reform, but more needs to be done. AFP/File/FLORENT VERGNES

Two weekend attacks by rebels on towns in the Central African Republic were repelled after fierce fighting, the UN’s MINUSCA mission said Monday.

A coalition of armed rebel groups have been accused of an attempted coup after waging an offensive aiming to disrupt last month’s presidential election, saying they would march on the capital Bangui.

But they have been kept away from the capital so far by federal soldiers, UN peacekeepers and reinforcements sent from Russia and Rwanda.

The western city of Bouar, which lies around 340 kilometres (210 miles) northwest of Bangui, came under attack on Saturday.

But UN peacekeepers and Central African forces “pushed back the fighters… during heavy fighting,” MINUSCA spokesman Vladimir Monteiro said in a statement. He added that MINUSCA had deployed “air assets”.

With 40,000 inhabitants, Bouar is the country’s fifth-largest city and is strategically located on a supply route from Bangui to neighbouring Cameroon.

On Sunday, armed groups fired rockets while attempting to force their way into a MINUSCA camp in the city of Grimari, 300 kilometres (185 miles) from the capital, said Abdoulaziz Fall, spokesman for the UN’s peacekeeping force in the country.

“This is the third-straight day that armed groups targeted (MINUSCA’s) Burundian detachment in Grimari, which again managed to push them back,” he said.

MINUSCA said that one Central African soldier had been wounded during the clashes in Grimari.

Six of the country’s most powerful armed groups, which have controlled two-thirds of the country since the start of a civil war in 2013, joined forces in mid-December to try to stop the presidential and parliamentary election.

The vote was nonetheless held on December 27, with President Faustin Archange Touadera winning re-election according to the electoral authority.

The Constitutional Court has until January 19 to validate the result.

The opposition has called for the election to be annulled, saying there were “many irregularities and instances of fraud” and that only half of registered voters were able to cast a ballot due to security concerns.

Since the election, the rebels have been largely confined to towns far from the capital.

An exception has been the town of Boali, just 80 kilometres (50 miles) from Bangui, where rebels have sporadically launched attacks that have been repelled.

Boali has been partially emptied of its inhabitants, said an AFP journalist at the scene on Sunday.

Central African troops have occupied the town’s market, with Russian paramilitaries — their faces covered by scarves — and Rwandan soldiers at their side.

The spent casings of heavy machine gun rounds littered the ground in some of the town’s deserted streets, the journalist said.

Two Russian Mi-17 helicopters flew over the area during a visit by Prime Minister Firmin Ngrebada, who travelled under heavy security to present medals to Central African soldiers.