All appeared lost until a Dutch nun from Mukakamanzi's church turned up at the prison and secured her release by paying the police. 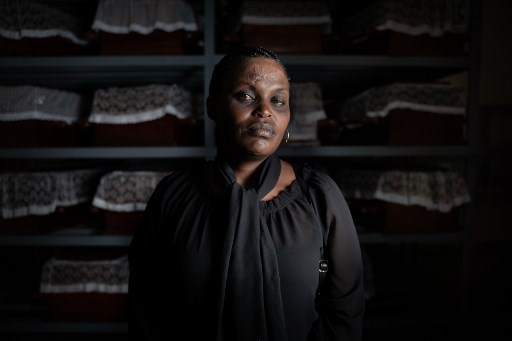 Genocide Survivor Albertine Mukakamanzi pose for a photograph in front of coffins in Gatwaro Genocide Memorial in Kibuye, western province of Rwanda, on December 1, 2020. - The Gatwaro Genocide Memorial has skulls, bones and belongings from hundreds of victims of the 1994 Rwanda genocide. The memorial, inaugurated in 2019, is located at the site of the former Gatwaro stadium where thousands of people were butchered. In Rwanda in 1994, between April and July, ethnic Hutu extremists carried out a genocide against the Tutsi minority and moderate Hutus in which at least 800,000 people were slaughtered. (Photo by Simon Wohlfahrt / AFP)

Those were the young Albertine Mukakamanzi’s final words to her mother, whom she last saw kneeling in prayer as the men with machetes closed in on their refuge.

Mukakamanzi has had to dig deep into her resources of courage to return to the place of that farewell, more than 26 years later.

The site, in Kibuye, in western Rwanda, is now a memorial of skulls, bones and belongings from hundreds of victims of the country’s genocide.

Here, Mukakamanzi had been hoping for — but also perhaps dreading — a glimpse of the clothing her mother wore that day.

Clad in black, the 48-year-old weeps silently, her tears masked by tinted glasses, as she gazes at a giant glass window behind which human remains are stacked.

They are just a few of the 800,000 people who were slaughtered in a 100-day welter of hatred and bloodlust, in the last genocide of the 20th century.

The memorial, inaugurated in 2019, is located at the site of the former Gatwaro stadium where thousands of people were butchered.

They included Mukakamanzi’s parents, two brothers, youngest sister and two nephews. She is her family’s only survivor.

Mukakamanzi appears embarrassed for breaking down at the sombre memorial, lined with coffins, torn and bloodstained clothes and rosaries.

“I don’t know what came over me, I never cry,” she says, gripping a railing on the memorial’s perimeter wall.

“I was looking to see if I could spot my mother’s clothes but I couldn’t see them,” she says bleakly.

The slaughter of Rwanda’s Tutsi minority was sparked by the assassination of president Juvenal Habyarimana — although the bloodbath had long been in preparation.

On April 6, 1994, a plane carrying Habyarimana, from the Hutu majority, was shot down in Kigali.

The plane was struck by at least one missile as it came in to land at Kigali, also killing Burundi’s president Cyprien Ntaryamira, another Hutu, on board.

The attack shattered a fragile peace process, triggering government-orchestrated massacres by Hutus that also targeted moderates in their own community. 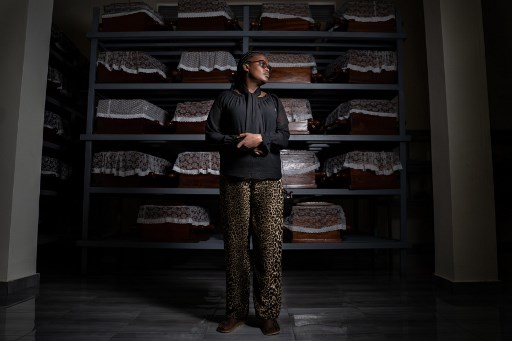 Genocide Survivor Albertine Mukakamanzi pose for a photograph in front of coffins in Gatwaro Genocide Memorial in Kibuye, western province of Rwanda, on December 1, 2020. – The Gatwaro Genocide Memorial has skulls, bones and belongings from hundreds of victims of the 1994 Rwanda genocide.
The memorial, inaugurated in 2019, is located at the site of the former Gatwaro stadium where thousands of people were butchered.
In Rwanda in 1994, between April and July, ethnic Hutu extremists carried out a genocide against the Tutsi minority and moderate Hutus in which at least 800,000 people were slaughtered. (Photo by Simon Wohlfahrt / AFP)

Mukakamanzi carries with her a past of almost indescribable suffering, a burden that she shoulders by a steely will to survive. Despite her ordeal, she is a bubbly and gutsy businesswoman.

During several hours of interviews with an AFP journalist at Kibuye near Lake Kivu in December, Mukakamanzi recounted the nightmare months of 1994.

In the first weeks of the genocide, her family’s home was burned down. The family fled, seeking refuge at the Gatwaro stadium like thousands of other Tutsis, who had been promised the gendarmes would protect them.

But the reality was the opposite.

Like the Home Saint Jean hotel or the Kibuye church — whose priest, Mukakamanzi’s uncle, was thrown off the bell tower — the stadium was attacked by the extremist Hutu militia, the Interahamwe.

The notorious group was a killing machine, created to torture and massacre Tutsis.

“We heard gunshots from far away and saw the Interahamwe brandishing machetes outside the stadium and shouting ‘Tomorrow it will be your turn’,” Mukakamanzi said.

“We quickly realised then that death was waiting for us.”

On the afternoon of April 18, they “kept on firing guns and throwing grenades, and returned in the evening with machetes and knives to kill people,” she said.

The family tried to regroup that night.

The elder brother had already been killed and her father and younger sister were seriously wounded by grenade shrapnel. Her other brother and two nephews had disappeared and were probably dead, she thought.

“I cried and told Mama ‘they are going to die… we are lucky to be alive, we must leave,'” Mukakamanzi says.

But her deeply devout mother refused.

She said she had sworn before God “never to leave Daddy, either in good times or bad.”

She relates slowly, with great emotion, the last moments with her mother, whom she left kneeling in prayer beside her injured husband and younger daughter.

The Interahamwe stormed the stadium that night.

By the time they had finished their work, ten thousand people who had been sheltering at the stadium the previous morning lay dead.

Emerging from the memorial, Mukakamanzi points to a thickly wooded mountainside through which she fled. 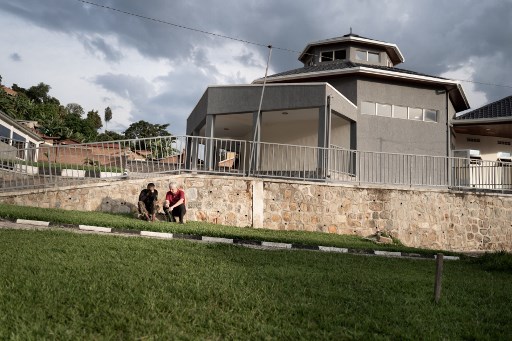 Genocide Survivor Albertine Mukakamanzi (L) is overwhelmed by emotion as Alain Gauthier (R) try to comfort her at the Gatwaro Genocide Memorial in Kibuye, western Rwanda, on December 1, 2020. – The Gatwaro Genocide Memorial has skulls, bones and belongings from hundreds of victims of the 1994 Rwanda genocide.
The memorial, inaugurated in 2019, is located at the site of the former Gatwaro stadium where thousands of people were butchered.
In Rwanda in 1994, between April and July, ethnic Hutu extremists carried out a genocide against the Tutsi minority and moderate Hutus in which at least 800,000 people were slaughtered. (Photo by Simon Wohlfahrt / AFP)

She lived like a hunted animal the next few weeks, hiding in the forest and only emerging at night.

One day she came across a hostile group. She was stripped and attacked. A woman then plunged a knife into her breast — a wound that caused a horrendous swelling, Mukakamanzi says.

She tried to go to the home of her godmother’s brother in a school in Kibuye but found no trace of him.

“There were bodies strewn all over the school,” she remembers.

Discovered by an Interahamwe group, Mukakamanzi —  fatigued and famished — was asked to “dig a hole to bury a baby alive”.

“I refused… they were going to kill me anyway,” she says, recalling the incident with glassy eyes.

“The Interahamwe dug a hole and put the baby in it… I can still see it shaking its head trying to get the soil out of its mouth.”

She was then beaten with mallets and left there.

In these bleakest hours came a ray of hope. She was found by a young Hutu man who was deeply devout and promised to hide her in his house in a locked room.

But one day she was discovered by the man’s mother who raised a furore, shouting “There is a cockroach (a pejorative term for Tutsis) here.”

Mukakamanzi was attacked with machetes, for which she still bears ugly scars on her scalp. She was thrown in the school’s latrines, where corpses had been piled.

Even so, “nothing can stop fate,” she says.

The young man who had sheltered her returned and used a rope to haul her out of the latrines. But an Interahamwe group arrived, and he fled.

“I was covered in filth, there were worms on my body and I smelt horrible. They said ‘Let her alone, she’s going to die anyway'”.

Then began “the longest journey of my life,” she recalls, describing how she staggered to the local hospital to try to get medical treatment.

“The big problem I had was that the dogs, which were feeding off corpses, wanted to eat me. I had to fight the dogs away with a branch.”

The only silver lining was that Mukakamanzi’s animal-like state prevented her from getting raped.

“I was 21 and looked like an old woman and stank like a corpse,” she says. Even passing militias would let her be, saying “Leave this bit of rubbish, she’s going to die.”

At the hospital in Kibuye “where treating Tutsis was strictly banned,” she succeeded in joining a group of young women who were able to hide in the morgue during daylight hours thanks to the help of a male nurse.

Some nurses would come in secret to treat her, throwing buckets of water over her body to clean her and “wash the insects out of my wounds.”

But one day, the morgue remained closed and the group of young women were found by the Interahamwe and then thrown into prison.

All appeared lost until a Dutch nun from Mukakamanzi’s church turned up at the prison and secured her release by paying the police.

Mukakamanzi took shelter at the home of her elder brother’s friend and at the end of June learnt that French troops had arrived in the town.

She then managed to get to an aid camp run by the French.

Mukakamanzi, like many other survivors, carved out a new life for herself in the bustle and anonymity of the capital Kigali and never once returned to the forest of Rubengera where she had hidden.

But things were never easy for her, even then.

Many of those who escaped the genocide like her have borne numerous sufferings since, adding to the heavy cross they already have to bear.

She married a genocide survivor who suffered from trauma, but they divorced a few years later and she raised their two daughters, now 24 and 20, by herself.

Mukakamanzi joined the Rwandan police force, retiring after 18 years of service to become an entrepreneur. She also survived a serious road accident.

For nearly 10 years now she has been helping a Franco-Rwandan couple, Dafroza and Alain Gauthier, in tracking down genocide suspects sheltering in France.

She has been asked to testify in a Paris court in the trial of Claude Muhayimana, a French-Rwandan accused of transporting the Interahamwe to western Rwanda to carry out massacres.

The trial was to start in February but has been postponed — the Covid pandemic has made it difficult for witnesses to travel to France and give their testimony.

The Kibuye memorial is located near a school. Life has returned to normal here now and the silence is sometimes pierced by the cries of shrieking children.

“My family perished but I am here to get justice, that’s what I can do for my family,” Mukakamanzi says softly.

“What I expect from a trial is relief if justice does its work.

“In all honesty, no survivor can spend a single day without thinking about that. Every gesture reminds you of a family member, a friend. But one shouldn’t think of that all the time, because one also has to live.”