MTN eSwatini and other cellphone operators received a directive on 29 June to suspend access to social media and online platforms indefinitely. 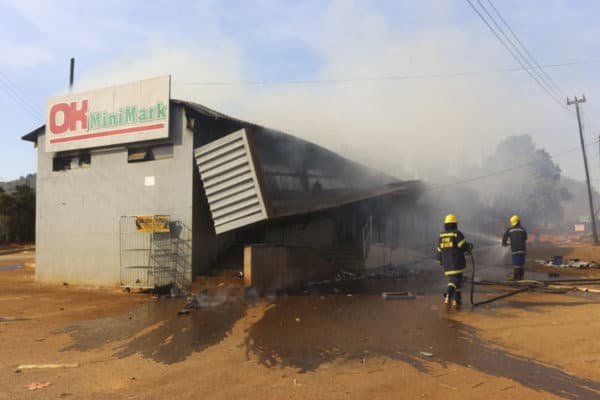 Firefighters extinguish a fire at a supermarket in Manzini, Eswatini, on June 30, 2021. - Demonstrations escalated radically in Eswatini this week as protesters took to the streets demanding immediate political reforms. Activists say eight people were killed and dozens injured in clashes with police. Internet access has been limited while shops and banks are shuttered, straining communication and limiting access to basic goods under a dawn-to-dusk curfew. (Photo by - / AFP)

South African cellular network giant MTN has confirmed that it has been taken to court in eSwatini to force it to restore the internet service in the country.

This comes as the kingdom has been rocked by violent protests calling for the abolishment of the monarchy and have it replaced by a democratic government system.

The cellphone group said MTN eSwatini and other cellphone operators received a directive from the eSwatini Communications Commission on 29 June to suspend access to social media and online platforms until further notice.

On Thursday, lawyers in eSwatini filed an urgent court interdict to force government, service providers like MTN, to reinstate the internet in the violence-marred country.

MTN said MTN eSwatini had implemented the directive after it carefully assessed it and in line with its license conditions and the group’s digital human rights due diligence framework.

“MTN eSwatini continues to engage with relevant stakeholders to limit the duration of the service disruption and is reviewing the details of the court applications in consultation with its advisers,” the MTN group said in a statement on Friday.

News24 reported that the court application was brought by the Institute for Democracy and Leadership (Ideal), along with various youth organisations.

This was confirmed by Ideal’s Thuli Makama.

The application named MTN, along with state-owned eSwatini Mobile and eSwatini Telecommunications Corporation.

The service providers were being sued, along with the acting Prime Minister’s office, the police and the auditor-general.

By following the government’s instruction, Makama said the MTN Group was “complicit” in the political crisis.

The internet had been down in eSwatini since Tuesday, creating a communications blackout in the country.

The shutdown coincided with a state-imposed curfew, and the closure of schools and universities.

The current protests were linked to a government ban on demonstrations and marches.