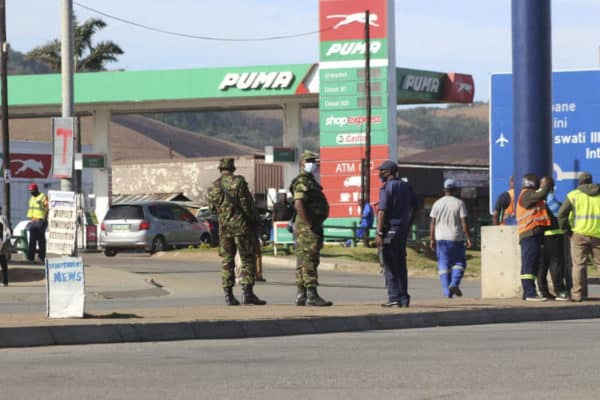 Eswatini soldiers and police officers are seen on the streets near the Oshoek Border Post between Eswatini and South Africa in July. Picture for illustration: AFP

The South African Development Community (SADC), at the command of President Cyril Ramaphosa, will deploy envoys to Eswatini, following days of violent protest.

They will be joined by Ramaphosa’s special advisor on international relations Maropene Ramokgopa, SADC executive secretary Elias Magosi, as well as representatives from Botswana and Namibia.

The envoys are expected to travel to the Kingdom this week.

The deployment follows after a high school was set on fire and civilians were wounded in Mbabane earlier this week.

Pupils and students have been protesting for a number of weeks, boycotting lessons and calling for free schooling, as well as an end to the regime under King Mswati III.

“His Majesty’s government has taken the decision to close schools indefinitely with immediate effect,” Prime Minister Cleopas Dlamini said in a statement.

At least 80 people were injured in Eswatini on Wednesday, a union leader said, as security forces cracked down on escalating pro-democracy protests in Africa’s last absolute monarchy.

The Swaziland Solidarity Network’s Lucky Lukhele said “no one is spared”.

“Not even the elderly or children are safe, [if] you are walking to a shop you are targeted.”

Lukhele called for urgent intervention “from the leaders of the SADC region that can talk some sense into King Mswati.”

Things could get worse for ANC in 2024 elections, if they don't shape up
5 days ago
5 days ago
PREMIUM!

Things could get worse for ANC in 2024 elections, if they don't shape up
5 days ago
5 days ago
PREMIUM!