The latest development has raised fresh fears for Somalia's stability as it struggles to hold elections and fight a jihadist insurgency. 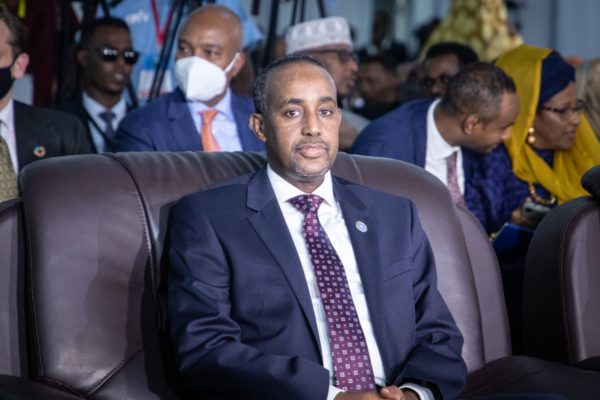 Somalia’s president announced on Monday that he was suspending Prime Minister Mohamed Hussein Roble, who called the move unconstitutional, intensifying a row over long-delayed elections in the troubled Horn of Africa nation.

The announcement came a day after the two men sparred over the country’s sluggish electoral process, with Roble accusing President Mohamed Abdullahi Mohamed, who is better known as Farmajo, of sabotaging the polls.

Relations between Farmajo and Roble have long been frosty, with the latest development raising fresh fears for Somalia’s stability as it struggles to hold elections and fight a jihadist insurgency.

On Monday, Farmajo’s office said the president had “decided to suspend Prime Minister Mohamed Hussein Roble and stop his powers since he was linked with corruption”, accusing him of interfering with an investigation into a land grabbing case.

But Roble hit back, accusing Farmajo of attempting “to take over the office of the prime minister by force (in) a move violating the constitution and the law of the country”.

“The prime minister… is committed to not being deterred by anyone in fulfilling his national duties in order to lead the country to elections that pave the way for peaceful power transfer,” said the statement released by Roble’s office.

ALSO READ: Conflict in Ethiopia: As rebels declare a retreat, what lies ahead?

Although reports spoke of a heightened military presence around the prime minister’s office, Roble was still able to enter the premises, a day after Farmajo withdrew his mandate to organise the elections and called for the creation of a new committee to “correct” the shortcomings.

The two men have traded accusations in recent days, with Roble alleging that Farmajo did not want to hold “a credible election”.

Farmajo in turn has accused Roble of trying to influence a probe into a scandal involving army-owned land after the premier sacked the defence minister and replaced him on Sunday.

“The prime minister has pressurised the minister of defence to divert the investigations of the case relating to the grabbed public land,” Monday’s statement by Farmajo’s office said.

Somalia’s elections have been hamstrung by delays for several months.

In April, pro-government and opposition fighters opened fire in the streets of Mogadishu after Farmajo extended his term without holding fresh elections.

The constitutional crisis was only defused when Farmajo reversed the term extension and Roble brokered a timetable to a vote.

But in the months that followed, a bitter rivalry between the men derailed the election again, alarming international observers.

Farmajo and Roble only agreed to bury the hatchet in October, and issued a unified call for the glacial election process to accelerate.

Elections follow a complex indirect model, with almost 30,000 clan delegates assigned to choose the 275 MPs for the lower house and five state legislatures electing senators for the upper house.

Once elected and sworn in, both houses of parliament then vote for the next president.

Elections for the upper house have concluded in all states and voting for the lower house began in early November.

But the appointment of a president still appears to be a long way off, straining ties with Western allies who want to see the process reach a peaceful conclusion.

On Sunday, the United States said it was “deeply concerned by the continuing delays and by the procedural irregularities that have undermined the credibility of the process”.

Analysts say the election impasse has distracted from Somalia’s larger problems, most notably the Al-Shabaab insurgency.

The Al-Qaeda allies were driven out of Mogadishu a decade ago but retain control of swathes of countryside and continue to stage deadly attacks in the capital and elsewhere.