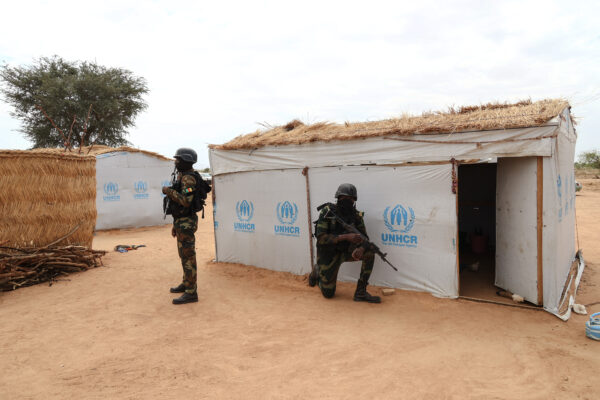 BIR security elements take a position near a shelter at the Bogo IDP site, during the visit of Filippo Grandi, UNHCR High Commissioner during a field visit in Maroua on April 28, 2022. (Photo by Daniel Beloumou Olomo / AFP)

Rebels killed five gendarmes in Cameroon near a region where a deadly conflict has pitted separatists from the country’s anglophone minority against the security forces, local sources said on Wednesday.

Armed men overnight Tuesday attacked a gendarmerie post in Njitapon in the West Region, around a dozen kilometres (eight miles) from the mainly English-speaking and restive Northwest Region.

A senior local government official, who asked not to be named, also accused anglophone separatists of carrying out the attack.

“The toll is five dead, all gendarmes, and three injured. We are combing the area,” he told AFP.

The Northwest and neighbouring Southwest Region are home to most of the anglophone minority in majority French-speaking Cameroon.

After years of chafing at perceived discrimination and marginalisation, anglophone militants declared an independent state, the Federal Republic of Ambazonia, in the two regions in 2017, triggering a crackdown by the authorities.

Separatists have targeted police, soldiers, officials and schools, which they deem to be symbols of the state, often carrying out kidnappings.

Cameroon’s 89-year-old President Paul Biya, who has ruled the country with an iron fist for almost four decades, has refused demands for a federal structure.

The United Nations and NGOs have accused the rebels and security forces of committing crimes against civilians in the two English-speaking regions.

The International Crisis Group (ICG) think tank estimates that the conflict has killed 6,000 people, mostly civilians, and forced more than one million people to flee their homes.

On Tuesday, Cameroon’s defence ministry said soldiers killed nine civilians including a baby earlier this month in the Northwest Region, admitting their actions were “inappropriate” and “manifestly disproportionate.”