The African legislative arm of the African Union held an Ordinary Session of the Fifth Parliament in Midrand this week. 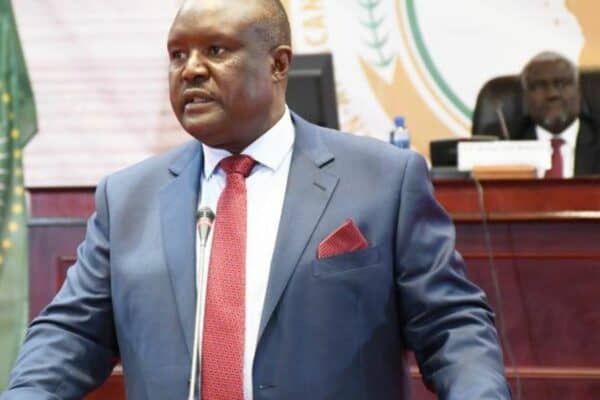 Fortune Charumbira was elected as the new president of the Pan African Parliament. Photo: Facebook (PAP)

Zimbabwean Member of Parliament (MP) Fortune Charumbira has won a one-horse race to become the president of the Pan-African Parliament (PAP).

Charumbira was elected on Wednesday 29 June – 161 votes out of the 203 votes cast with 31 abstaining and 11 spoilt papers.

The African legislative arm of the African Union held an Ordinary Session of the Fifth Parliament in Midrand this week.

The elections come following a stalemate which saw the legislative arm of the African Union failing to choose its leaders owing to differences in modalities of handling the election last year.

The deadlock was resolved by an Executive Council decision in October 2021, which reiterated the adoption of the principle of rotation when electing the leadership of the institution.

Speaking after his victory, Charumbira pledged to unite and develop the PAP.

“I want us to come together; we need to immediately fight and destroy the divisions caused by these foreign languages in Africa imposed on us by outside continents and resulted in us identifying one another as Anglophones, Francophones and Lusophones.”

Charumbira says he is a President for everyone despite how the delegates voted.

“It is high time we put our African people forward and do away with unnecessary conflicts.

“Together we can achieve more, we will only develop our continent when united and this is an essential thing for our people to see and experience in our lifetime.”

Charumbira is a traditional leader in Zimbabwe and the current President of the Chief’s Council.

In 2013, he was retained as president of the Chief’s Council in elections conducted by the Zimbabwe Electoral Commission in Harare.

He served as Deputy Minister in the Ministry of Local Government and Public Works in 2000.

He is a specialist in Institutional Change and Performance Improvement.