The ANC isn’t ready to radically transform the SA economy

The economic transformation discussion document released by the governing party actually fails to be radical. 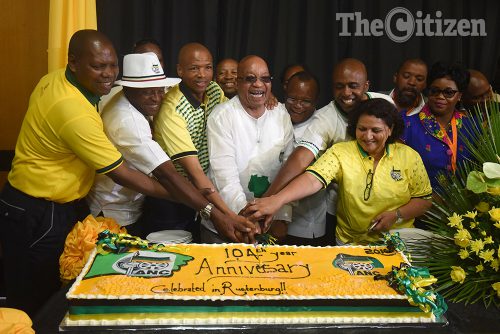 President Jacob Zuma is joined by NEC members and invited guests in cutting the ANC's 104th anniversary cake during the official ceremony in Rustenburg, 08 January 2016, ahead of the party's celebrations taking place at the Royal Bafokeng Stadium in Phokeng, 09 January 2016. Picture: Refilwe Modise

There’s nothing radical about trying to fix what doesn’t work by making it work better, which is why the economic transformation discussion document released by South Africa’s governing party, the African National Congress (ANC), is not really radical.

The document is also unlikely to renew the economy, ensure that more people are included and create conditions for sustained growth.

It was released recently as part of the ANC’s preparation for its conference at the end of this year. They’re always preceded by a mid-year policy conference, which is meant to agree on resolutions to be put to the conference.

It’s ANC practice to release policy discussion documents in preparation for these meetings – hence the economic document. The party’s leaders point out that it doesn’t express ANC policy since delegates at the conferences could reject it. But it does give an important sense of the thinking of the party’s economic policy strategists.

In keeping with the current ANC rhetoric, the document stresses the need for “radical economic transformation”. It says proposals for change should be judged by whether they

radically and systematically improve the lives of those who are excluded and marginalised.

The document is filled with good intentions and worthy ideas. But it fails the test.

More of the same

The problem is that it ignores calls to seize land or rein in ‘white monopoly capital’ – the themes of today’s “radical” rhetoric. These demands are either ploys by patronage politician’s eager to get hold of resources or slogans pretending to be concrete recipes for change. It’s not radical, nor will it achieve its stated aim, because it doesn’t suggest ways of moving the economy from its current pattern which has produced low growth and continues to exclude millions.

Like both sides in the economic debate, it doesn’t seek a new path which will include millions more. Instead, it keeps alive the forlorn hope that the excluded can be absorbed into an economy built to exclude them.

Perhaps the clearest sign of this is the discussion on employment. The document endorses the National Development Plan’s target of shrinking formal unemployment to 6% by 2030. It says this will be achieved by lowering costs, increasing investment and improving energy generation, transport and water supply.

All would no doubt be widely welcomed. But all assume that the current system can be made to work better and so there’s no need to change it.

Tweaks are not enough

The specific remedies which the document proposes lack the required innovation too. These include minerals beneficiation, incentives for manufacturing, reducing red tape, more training, more emphasis on research and development. They all assume that the economy needs tweaking, not changing.

Even where it proposes measures which seem more radical – “set asides” for black businesses or speeding up land reform within the confines of the constitution – the document doesn’t challenge the current framework.

And so, despite some rhetoric to the contrary, it doesn’t get to grips with the core reality that the formal economy is still an insider club which excludes millions. It’s dominated by too few players engaged in too many cosy networks, many racial patterns persist and potential in the townships and shack settlements is squandered. A core reason is that both the old economic elite and the new political leadership assume that the economy will reach its potential when everyone has what whites had in the 1960s – full employment and a stake in the formal economy.

This ignores two realities. First, the apartheid economy worked for the minority because it excluded most people; it can’t be extended to everyone. A real break with the past would mean negotiating changes which would bring in many new players and dropping the prejudice that wealth can be created only by formal businesses protected by a host of rules. This means accepting that people who make a living outside the formal economy are a potential solution, not a problem, if they receive more support.

Second, the days in which manufacturing and mining could create millions of jobs are gone: the formal jobs the document wants to create are disappearing across the globe. The question is not how to get them back but how to ensure that everyone can make a living without them.

A sign that the document ignores inclusion is that it has nothing to say about township business besides a throw-away line about reducing costs. So a key question – how to link people in townships and shack settlements into the formal economy – is ducked. This despite the fact that it offers a far more credible way out of poverty than reviving jobs which are gone.

Nor is there anything about how to revive mining areas hit by the loss of jobs which will never come back. Or on how to stimulate economic activity for people who 20 years ago would have worked in factory jobs which have gone forever. And so there’s nothing on ensuring that formal business and government strengthen economic activity on the ground rather than snuffing it out.

There isn’t much on the education and training needed to help people adjust to new realities. Or programmes to boost grassroots livelihoods – such as grants and local infrastructure.

Only two proposals address these issues: the document calls for more effective rules to boost competition, and for changes to the settlement patterns in cities, which relegate the poor to the fringes where they are shut out of the mainstream economy.

But neither proposal is fleshed out. It’s therefore fair to question how much of a priority they really are.

The ANC discussion document on economic transformation isn’t radical enough not because it refuses to substitute slogans for thinking. Rather because it doesn’t break with an economic debate which – on the left, right and centre – is about how to keep current patterns alive, not how to change them.