As ANC implodes, Thabo Mbeki tries to rewrite his own history

As South Africa’s political climate goes from fractious to feverish, with protests mounting against the embattled president, Jacob Zuma, a former national leader and titan of the ANC has waded into the fray. 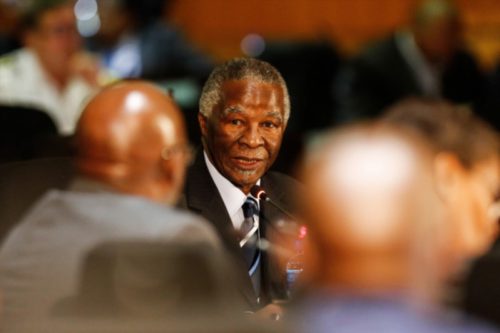 As South Africa’s political climate goes from fractious to feverish, with protests mounting against the embattled president, Jacob Zuma, a former national leader and titan of the ANC has waded into the fray.

Thabo Mbeki, who led South Africa between 1999 and 2008, recently wrote about the possibility of another no confidence motion against Zuma, now being tabled by the opposition. He argued that should such a vote happen, MPs should vote in the national interest rather than obey orders from their party.

On one score, this is the latest iteration of Mbeki and Zuma’s bitter, unreconciled feud, which dates back to Zuma’s humiliating defenestration of Mbeki as ANC and state president in 2007-8. But there’s something more purely self-serving going on here too.

Mbeki has always viewed himself as an intellectual titan, not simply another calculating politician looking to land the latest blow. His contributions to the national and international conversation supposedly carry a weight and gravitas that demand deference. This supposedly elevates him above Zuma, an essentially grubby and scheming politician devoid of substance who is incapable of raising his gaze beyond his own immediate political and material interests.

Given Mbeki’s record in national office, his lofty reputation is not entirely deserved. And whatever his intellectual pretensions at this extraordinary political moment, his position is extremely flimsy – and it may have more to do with rescuing his own reputation than anything else.

Mbeki’s argument that MPs are principally accountable to “the people” would make more sense if they were directly elected. But they aren’t. Under South Africa’s proportional representation system people vote for parties, not individual representatives. Parliamentary candidates run on lists drawn up by their party leaders, and their ranking on the list is what determines their chance of getting into office.

This in turn means that whether or not lawmakers intentionally defy the will of the people (whatever that means), their understanding and expression of the people’s interest is filtered through their party affiliation.

Mbeki’s position has an uncharacteristically populist edge, then, and it doesn’t amount to much of a plan of action. How exactly should MPs determine the will of the people? The size of protest marches? Opinion polls? Radio phone ins? Strict loyalty to a party line is certainly contentious, but it can at least be traced back to a direct electoral mandate, not some nebulous sense of the “mood of the nation”.

Mbeki’s new-found populism is also a radical about face from his own behaviour as president of both his party and his country. Freedom of conscience and deference to the electorate were not ideals which Mbeki was keen to nurture – quite the opposite, in fact.

During his tenure, ANC MPs were regularly corralled, coerced, and threatened into line not least by Mbeki’s own attack dog, Essop Pahad. Perhaps the definitive example came in 2000, when Pahad, acting on Mbeki’s behalf, demanded that ANC MPs serving on the Standing Committee on Public Accounts back off from their scrutiny of an infamous arms deal and the widespread corruption it allegedly generated. (This incident was detailed in ANC MP Andrew Feinstein’s book After The Party.)

When Mbeki was in power, no distinction was ever made between “the party” and “the people”: the ANC itself was considered synonymous with “the people”, while opposition parties were all too frequently denounced as “racists” or “enemies of transformation”. Mbeki was a ferocious centraliser who worked hard to concentrate power in his own office. He punished dissent, and imposed his own discipline on party and government from the top down; the ANC’s parliamentary caucus became a rubber stamp, unable to fulfil its constitutional obligation to provide a full and proper oversight of the executive.

So when Mbeki argues that the controversy around Zuma has finally “imposed on our country the opportunity and obligation the better to define the constitutional and moral relationship between the people and their elected representatives”, one is compelled to ask: what exactly has changed? What about the many controversies that disfigured Mbeki’s own presidency?

The arms deal, the spread of corruption, the concentration of presidential power, disastrous HIV/AIDS denialism, the indulgence of Robert Mugabe’s ruinous tenure in Zimbabwe – none of these were extensively debated or scrutinised in parliament, with MPs encouraged to exercise their independent spirit and put the “national interest” ahead of the party. Instead, Mbeki maintained a vice-like grip over all policy areas, forcing MPs do their leaders’ bidding.

It’s only right that many in South Africa and the ANC should want to end Zuma’s squalid, incompetent and shameful presidency, but that is no reason to recast the Mbeki era as some sort of golden age. It was then that many of the ANC leadership’s worst tendencies first became entrenched – and five years into Mbeki’s tenure, Archbishop Desmond Tutu lamented the “sycophantic, obsequious conformity” and “unthinking, uncritical, kow-towing, party line-toeing” which had become the ANC norm.

This is the same vocabulary Mbeki is now using. As political conversions go, it’s as hypocritical and cynical as they come. 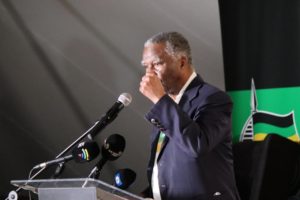 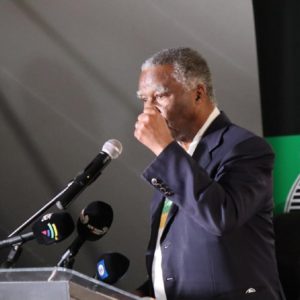