Leaders ignoring the rule of law has become the rule

One still has to believe that the power of democracy will triumph, but in times like this, it's hard. 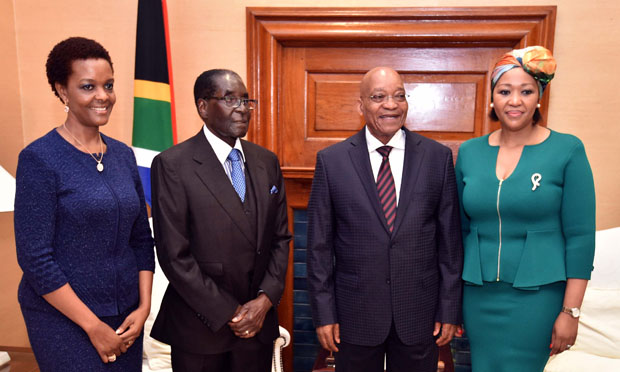 Robert and Grace Mugabe, Donald Trump, Jacob Zuma and Rodrigo Duterte are national leaders spanning the political spectrum. But they share a characteristic that bodes ill – a chilling indifference to the rule of law.

It has been a spectacular week for this motley crew, as they hack at the judicial principles that are the framework from which all civilised life is delicately suspended.

On Monday, Mugabe said that those who killed white farmers during the country’s controversial land reform programme were immune to prosecution.

“Why should we arrest them? No judicial decision will stand in the way we have adopted to acquire the land.”

On Tuesday, Trump, who had outraged with his initial failure to condemn neo-Nazi violence that left a young woman dead, got himself deeper into trouble.

He softened his belated criticism of the “alt-right” by saying that there were “many sides” to the story, implying that they had been provoked.

On Wednesday, Philippines President Duterte’s campaign to end drug abuse through the extra-judicial execution of dealers and users alike had its most successful day ever, with the police shooting dead 32 people.

On Thursday, Duterte said that if human rights groups got in their way, then the police should simply shoot them, too. And meanwhile, in South African, Zimbabwean first lady Grace Mugabe was ducking and diving while trying to evade criminal charges.

Grace allegedly physically assaulted a young woman who seems to have been dallying with her playboy son in a luxury Sandton hotel.

Despite a flurry of assurances from Police Minister Fikile Mbalula that Grace had or would hand herself over to the police, or would be arrested, none of these things happened.

She went to ground while Zimbabwean officials hastily tried to negotiate post-hoc diplomatic immunity for her, although experts say that immunity cannot be awarded for criminal acts by someone who holds no official position and who was here on private business.

While it is sometimes difficult with President Jacob Zuma’s government to determine whether its actions are the result of political duplicity or merely its habitual gross administrative incompetence, the result is the same – it’s an erosion of the law and a diminishment of the protection that every citizen is constitutionally entitled to.

To trace the history of democracy is to follow the painstaking ensnarement of tyrants in a web of laws.

While each single legal thread is fragile, they have a cumulative weight that eventually renders despots unable to exploit and abuse their citizens with impunity.

Once upon a time, this seemed a pretty much irreversible process.

By the ’90s, think-tanker Francis Fukuyama felt confident enough that democratic government had proved itself superior to all other ideologies.

When, just a couple of years later, the most avidly followed and protracted liberation struggle of contemporary times ended in the installation of a democratic government in South Africa, the theory appeared vindicated. It’s, of course, never that simple.

Fukuyama has since revisited his over-optimistic predictions and, while reiterating the power of the democratic ideal, warns it can be derailed by corruption, crony capitalism, and political decay.