Zuma dishes up the Last Supper

He is a shameless, unscrupulous opportunist. The ease with which a leader can surround himself with indentured sycophants is not a novel. 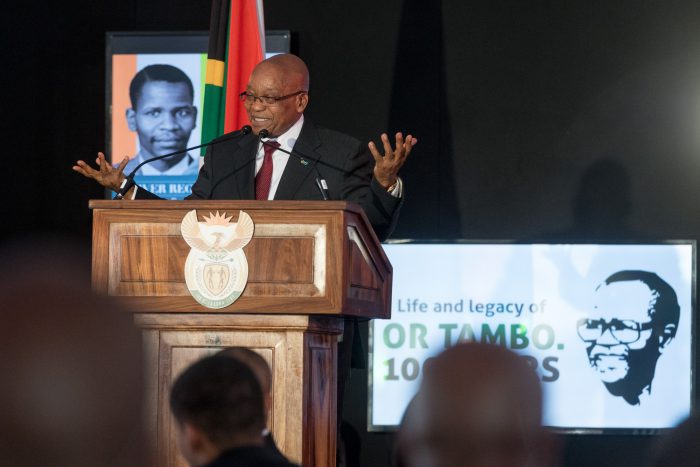 President Jacob Zuma makes a speech during the celebratory lunch in honour ofthe unveiling of a statue of OR Tambo in the International Arrivals terminal of OR Tambo Airport in Johannesburg on 19 October 2017. Today marked the unveiling of a statue in honour of the struggle icon by President Jacob Zuma. Picture: Yeshiel Panchia

It’s a mistake to deduce from Jacob Zuma surviving the past tumultuous dozen years without going to jail or being ousted, that he is some kind of Machiavellian genius. He is not.

There is no subtle intelligence at work here. Zuma is simply a shameless, unscrupulous opportunist. The ease with which a leader can surround himself with indentured sycophants is not novel.

Nor is the ability to intimidate rivals with spurious allegations of sedition, distilled from home-brewed “intelligence” reports. It does not take strategic brilliance to exploit ethnic and racial tensions.

It does not take tactical wizardry to use inflated ANC membership figures to control branches and congresses and, ultimately, to secure the presidential secession.

Zuma’s Cabinet reshuffle this week follows a familiar pattern. Like the previous 11, it does not improve disastrously poor ministerial oversight but buffers his immunity from prosecution and expedites the looting of state assets.

With the axing of higher education minister Blade Nzimande, the general secretary of the SA Communist Party, the president has now reduced the SACP to token status.

The other important appointment is that of David Mahlobo. He, the brothel-creeping confidante of a rhino-poaching illegal immigrant, becomes minister of energy after previously serving as minister of state security.

Mahlobo is now in position to drive the implementation of the nuclear deal with Russia. This is the trillion-rand main course at a Last Supper of tenderpreneurial excess, before leadership elections potentially end the feast.

There is no evidence of Machiavellian brilliance in any of this. But there is some blunt-force primal intelligence at work here, of the kind that Zuma shares with US President Donald Trump, who similarly confounds us with what he gets away with.

At the nub of it is an awareness that outrageous behaviour can take one a long way in a world where most people – even politicians – are fundamentally decent people. It is the realisation that brazen actions can achieve unexpected successes.

To operate effectively, democracy depends on tacit conventions almost as much as it does on formal legal underpinnings. There is no law that says a leader who has lost the confidence of much of his executive should resign, but this is what happens in most of the rest of the family of democracies.

Elsewhere in the democratic world, credible allegations of criminality and corruption would normally preclude elevation to high state office. Or, if the accused is already an incumbent, their sidelining at least until the reputational pall has been lifted after a thorough investigation.

These are all critical self-regulatory mechanisms that rely not on the judiciary, but on the ruling party itself, to implement them. It is the ANC’s dismal failure to do any of this that is directly responsible for the parlous situation that SA finds itself in.

Zuma is the quisling within government, the man who removed the guardians of fiscal probity. The ANC is the party that betrayed SA by not preventing him from doing so.