Maimane needs to show he is the leader of the DA

Maimane has done nothing at all to dispel the notion that he’s simply a black figurehead presiding over what is essentially a white party. Every relationship has a beginning and an end. Political relationships are no exception to this rule.

In August 2010, when the Democratic Alliance (DA) swallowed up Patricia de Lille’s Independent Democrats, it was said at the time it was a marriage that would last. I have no doubt Helen Zille and De Lille saw their union lasting well beyond 2018. Yet, here we are. It’s 2018 and the relationship has ended, acrimoniously at that. And like in most human relationships, the dirty laundry has been hung out for all to see.

The biggest casualty of this fallout might seem at first sight to be the voter, or De Lille herself. But on closer inspection it becomes clear that the biggest loser lies within the DA.

The acrimony that accompanied the mayor of Cape Town’s departure from the DA has not portrayed the party in a positive light. Her simple request to be given a chance to clear her name in an inquiry open to the public has been stonewalled in the most spectacular fashion by the offi cial opposition.

Rarely has a party closed ranks like this in dealing with one of their own. Three motions of no confidence, endless court cases and a public war of words without a referee, and we still have not seen the end of the matter.

The latest allegation to emerge from De Lille is that DA leader Mmusi Maimane offered her a seat in parliament in exchange for walking away from the Cape Town mayor’s office.

And therein lies the heart of the matter. Maimane, who has shown an alarming lack of leadership on this particular issue, emerged late in the game to make an unethical offer to resolve the matter. Surely, if “Aunty Pat”, as her supporters affectionately refer to her, is being got rid of for corruption, the goal should never be to reshuffle her internally, but to get her prosecuted.

Maimane has done nothing at all to dispel the notion that he’s simply a black figurehead presiding over what is essentially a white party.

The DA loves to bring out voting statistics at this point, gleefully pointing out that at the last election, the biggest chunk of their votes came not from white voters, but from black voters.

What they miss is people pointing out that the party is white are not basing it on numbers or statistics, but on what they see happening within the top echelons. They seem to not understand that, to the layman, perceptions are reality.

Maimane has no meaningful leadership role outside of his being leader of the opposition in parliament. When Zille was party leader, she assumed the highest leadership position available to the DA, being mayor of the City of Cape Town. When the province was won, she became premier.

Maimane is not premier or mayor, just a party leader, and people wonder why he’s seen as just a fi gurehead without proper power.

De Lille’s fight to clear her name has exposed the DA’s family secrets. It has shown all and sundry where the power lies within the party and Maimane would do well right now to start setting things right – to assume his real role as party leader and speak out about his real feelings over De Lille’s axing.

That is the only way he can dispel the notion that his party represents the interests of the white section of our population. 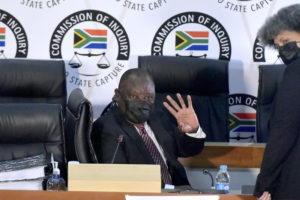