It’s good to have humble Brits back

Talking the ever-smiling front rower out of a deserved retirement at the age of 37 could well turn out to be a masterstroke by coach Rassie Erasmus. 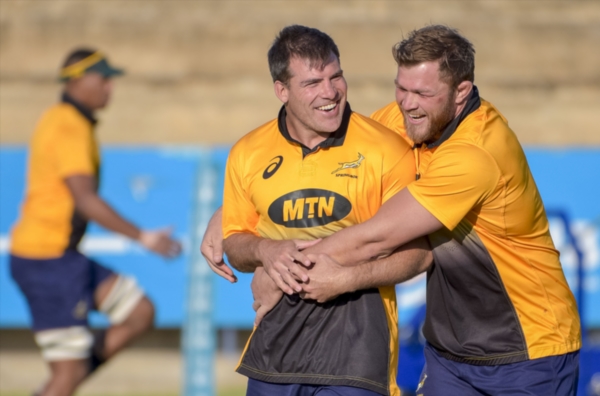 It is indeed right and just that the focus on today’s second Test against England in Bloemfontein will be split between the opportunity to wrap up the three-match series and the celebration of Beast Mtawarira’s remarkable durability in the Springbok front row in his 100th international.

But it would be remiss not to celebrate the return to the national set-up of hooker Schalk Brits. Talking the ever-smiling front rower out of fading into a deserved retirement at the age of 37 after a fabled nine-year career in the English Premiership and 144 appearances for Saracens, could well turn out to be a masterstroke by coach Rassie Erasmus. Brits brings something special to any squad.

Brits has always been a team man, a fact attested to by former national coach Peter de Villiers, who awarded him the first of his 10 Springbok caps in 2008. “Schalk,” he said, “was always an enthusiastic member of the Bok squad; the first man to handle the baggage or carry the tackle bags.” That alone would put him a step up in humility on many of our prima donna internationals.

Towering 2.03m, Sarries lock Jim Hamilton – in well-earned retirement after a career encompassing 63 appearances for Scotland – has a similar take on Brits in the aftermath of a devastating defeat.

“Everyone was down, everything was quiet, and then Schalk runs into breakfast wearing a vivid lime green tracksuit. ‘How’s everyone today?’ he shouts. It was impossible not to laugh and get yourself back up.”

But the most fulsome praise of all came from the highly respected Stephen Jones, rugby correspondent of the London Sunday Times.

“He is,” Jones wrote, “the most amazing rugby player I have seen. No doubt, no qualification.

“How many players have you seen who can cut the angles so silkily, who puts players through gaps with a pass or surges through himself on to passes, stands back to take high kicks and hardly ever fails to run them back with interest?

“Or who often stands in the openside flank position to lead the defensive line at rare pace, has a vast range of skills, understands the head-up game better than most flyhalves – and then goes down and hooks in the scrum?

“This is maestro stuff.