Despite Jacob Zuma being dethroned, the party remains at war with itself. That doesn't seem about to change soon. 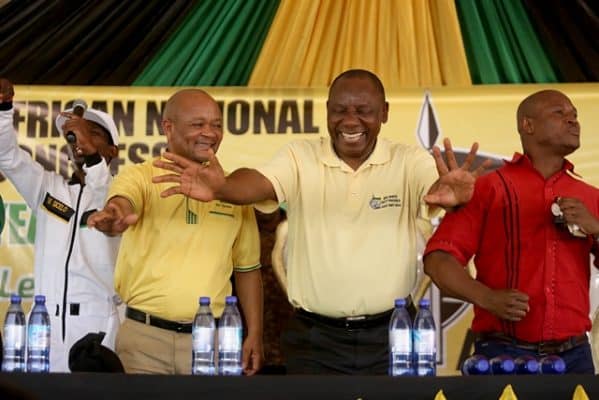 South Africa’s governing party, the African National Congress (ANC), is in crisis less than a year before a general election expected to be held in mid-2019. If it wants to end the crisis, it may have to do something about which it talks a great deal, but does little: trust its members.

The ANC has been in crisis for years, as its own documents confirm. Its regional and provincial leadership elections are almost routinely challenged as losers claim the winners broke the rules. Often the challenges centre on claims that the process in which branches send delegates to conferences was flawed.

It was this crisis that ensured the ANC could choose leaders last December only because the contesting factions made a deal to share positions. Without that bargain, the losers would have cried foul. There was no guarantee that the conference would continue – and every certainty that, if it did, the outcome would be tested in court.

The deal kept the ANC afloat, but did nothing to ensure that anyone in the governing party trusts its processes or that there’s a structure in the ANC with enough credibility to settle disputes and convince the losers, or those who fear they will lose, that the processes are fair.

This crisis could grow as the ANC chooses candidates for its 2019 election lists. Much is at stake. Who is chosen will decide which faction dominates in national and provincial parliaments. And, because economic opportunities in the market are limited, winning a place on the list that gets you a seat can, for many, be a ticket into the middle class.

So a heated contest seems certain and the ANC’s current performance makes it likely that losers will claim they were done down. Since voting trends (in local by-elections, which give a sense of who voters are supporting) suggest that the ANC will win next year’s election comfortably, the battle to choose candidates may be far more damaging to it than the election.

Part of the reason for the crisis is the ANC’s failure to tackle the exclusion of millions from the mainstream economy. Because it has not engaged key economic interests in negotiations on opening up the economy, politics for many of its members is not about public service or status but about looking for resources.

Even if it plans to address this urgently – and there is no sign it does – the problem will take years to fix. So its elections will remain, at least in part, a battle to make it in the economy and there will be huge incentives to break the rules. This means it will remain in crisis unless it looks at its own organisational problems.

It has recognised these problems – it excels at identifying its woes and discussing them openly. But, although it has debated remedies and set up teams to deal with them, its willingness to say what is wrong is not matched by an ability to put it right.

This is because the problems are deep rooted. But it is also because the ANC has done little or nothing to fix the structures where the problem starts – its branches. The more than 3 000 branches are the core element of ANC decision-making. They nominate candidates for office and choose most of the delegates at conferences who vote for leaders. They are also meant to be the units in which ANC members discuss policy. But ANC documents and other sources report constant claims that branches are constituted, or operate, in ways which are irregular.

The ANC routinely insists that the branches are all-important. And it does try sometimes to put out fires at branch level. But it has never begun a concerted effort to ensure that the branches really are where power lies and where members can express themselves openly.

ANC leaders would hotly deny this. It is an article of faith within the organisation that the leaders are simply servants of the members in the branches. But many branch members complain about being ignored, bullied into supporting factions or generally being treated like useful weapons in the battles between elites.

Making sure branches wield real power and allow members a say is difficult –because so many are excluded from the economy, while some do join branches in the hope of attaching themselves to politicians who will steer resources their way. But it is not impossible. Many members belong to branches because they care about the ANC and the country. Many are unhappy with vote-buying and corruption and would fight it if they were taken seriously.

It is also essential. The only way to fix the ANC is to make sure that the branches have power to fend off those who would buy or bully them and to hold to account leaders who look after themselves, not citizens.

Perhaps the most common refrain in this country is that we need “leadership”. But leaders do what the people want only if the people are strong enough to make sure they do. That is as true for the ANC as for the country.

If it wants elections that are about who has most support, not who is better at rigging branches and pushing them around, it has no option but to make sure that its branches really do call the shots.