SA’s white right, the alt-right and the alternative

The pressure group AfriForum and its allies want to be the only voices speaking on behalf of Afrikaners. 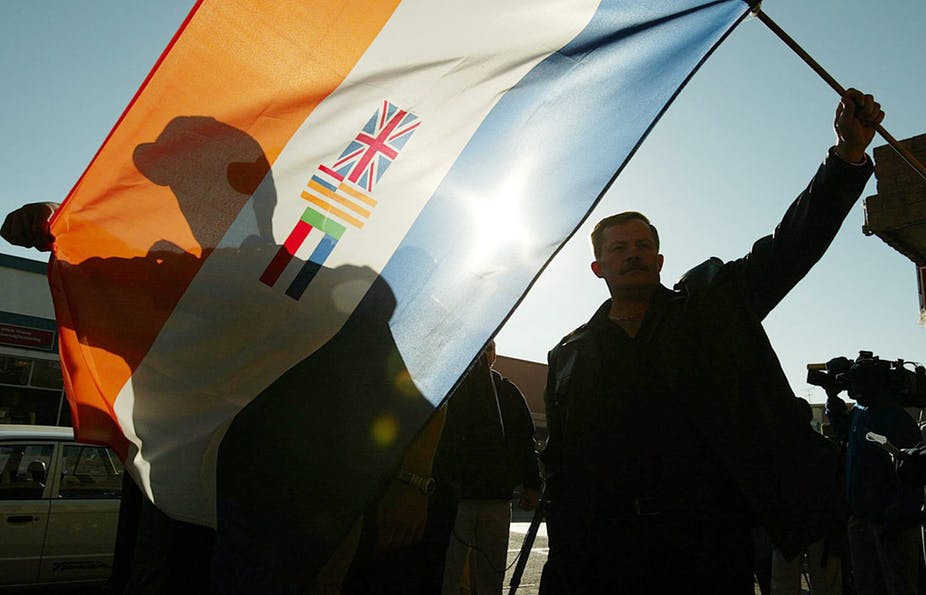 South Africa’s far right never had a big support base, even under apartheid. Kim Ludbrook/EPA

There has been a global rise in populism, especially of the right-wing variety. In South Africa this has manifested in the increasingly strident AfriForum. This pressure group purports to advance the rights of Afrikaners, the ethnic group most closely identified with the former apartheid regime.

The prime ministers and presidents who ran the country from 1948 until 1994 were all Afrikaners.

AfriForum is usually ignored outside of Afrikaner ranks. But it attracted the ire of South Africans more broadly when two of its leaders, CEO Kallie Kriel and his deputy Ernst Roets, undertook a mission to the US in May this year. Their aim was to convince alt-right figures that white farmers were being targeted for murder.

Roets even secured an interview with Fox News’ Tucker Carlson. The interview on the right-wing broadcaster apparently inspired US President Donald Trump to tweet that his administration will investigate the “large scale killing of (white) farmers” in South Africa.

AfriForum calls itself a “civil rights organisation”. Until recently its primary approach was to use the country’s human rights-based constitution to launch court cases in defence of white Afrikaans speakers and, at times, of black people amenable to its agenda.

But it has since become the face of white denial about the past, and of defiance of the need for redress in the most unequal country in the world. AfriForum has successfully translated a growing resentment about the loss of Afrikaner control of the state into a political project.

During the last decade of the country’s 24-year-old democracy a form of schadenfreude has emerged among white right-wingers. State capture, in the shape of massive corruption, and factional infighting in the governing African National Congress (ANC) have harmed state capacity. Multiple political, economic and constitutional crises have in the minds of white right-wingers confirmed their racist narrative that “black people can’t govern”.

An increase in public expressions and incidents of racism suggests a return to an intransigence that’s unapologetic about continuing white privilege and colonial and apartheid abuses. A more antagonistic AfriForum stepped into this moment rife with political opportunity.

Its politics is a cunning combination of Afrikaner nationalist mobilisation from the past with contemporary neoliberal elements and alt-right rhetoric from the US, Australia and Europe. AfriForum is part of the Groter Solidariteit Beweging (Greater Solidarity Movement) that includes a trade union, a media house and companies selling education and other services.

According to Solidariteit, its movement has 350,000 members – sizeable in relation to a white population of 4.52 million. Solidariteit and AfriForum are the 21st-century versions of the cultural entrepreneurs of the volksbeweging (people’s movement) that constructed and advanced the Afrikaner’s identity a century ago.

This movement, which included Solidariteit’s earlier manifestation as the whites-only Mineworkers’ Union (MWU), rose to state power in 1948 on the back of the promise of an expanded form of colonialism named apartheid.

Upward mobility due to apartheid benefits caused the Afrikaner nationalist class alliance to split between the middle class verligtes (“the progressives”) and the working class verkramptes (“the reactionaries”). Verligte reform of apartheid to suit the changing operation of capitalism was detrimental for remaining Afrikaner workers.

It resulted in the formation of the Conservative Party (CP) in 1982. At the referendum 10 years later the verkramptes voted against the continuation of talks for the establishment of a non-racist, non-sexist democracy.

AfriForum hails from this political tradition. Not only is its parent organisation the former Mineworkers’ Union, but the same names appear. For example, Kriel was a youth leader of the Freedom Front Plus, a party that continues the CP legacy, with four seats in parliament.

AfriForum is a political expression of what I call neo-Afrikaner enclave nationalism. This is a post-apartheid phenomenon that combines an “inward migration” to white spaces (suburbs, institutions, media) with connectedness to global whiteness. In their discourses racism is recast as “culture”, and heteropatriarchy as “family values”.

It’s channelled through the consumption of products. Individuals become Afrikaners by being consumers of Afrikaner culture, media products and related services, and spaces.

In a historic irony, democracy has brought together what apartheid rent apart. Verligtes and verkramptes meet each other under the sign of the market. Afrikaner identity becomes enacted through consumption.

The tradition that the enclave nationalists draw on has historically only represented about 30% of white people, judging by the CP’s support and the “no” vote of the 1992 referendum. Solidariteit, AfriForum and their verligte media allies are eager to expand their constituencies.

Alt-right rhetorical devices are employed. Prejudice, half-truths and distortions are combined with insults and threats of violence. For example, in a 31-minute late-night monologue on YouTube Roets attacked law professor Elmien du Plessis for criticising AfriForum’s US visit.

He concluded by quoting Jewish writer Victor Klemperer, who wrote that if the tables were turned after the Holocaust he,

would have all the intellectuals strung up, and the professors three feet higher than the rest.

It’s relevant to mention that Du Plessis is a white Afrikaans-speaking woman. As other examples also show, the ranks of patriarchal whiteness are again closing in defiance of racial and gender justice. The policing of the boundaries of the Afrikaner identity has been stepped up.

As happened during apartheid, alternative voices are delegitimised. AfriForum and its allies actively seek to suppress positions that contradict theirs. Gauging the extent of dissidence among Afrikaans-speaking whites is difficult. Many no longer identify as Afrikaners. Many are getting on with their contributions to make South Africa’s democracy work.

Most would be loath to organise as Afrikaners. But given responses that show that many among their compatriots and in the outside world see the white right as representative of all white Afrikaans-speakers, the time may have come for those in support of justice and equality to be more vocal in keeping the record straight.