She inherits an agency that is dysfunctional, divided and neglected, and that's just the start of it. 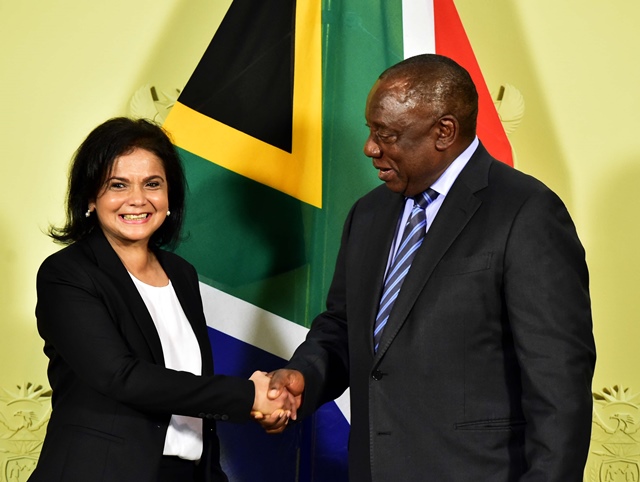 The appointment of Shamila Batohi as the new head of the National Prosecuting Authority (NPA) has elicited widespread delight.

In fact, not since Cyril Ramaphosa’s victory over the forces of darkness at last December’s leadership conference has there been such national excitement. Unfortunately, Ramaphosa’s “new dawn” has since proven to be somewhat delayed and murkier than hoped.

And, also unfortunately, the elevated hopes that attend Batohi’s appointment may be similarly dashed. Not necessarily through any fault of her own.

As we know from the seven-year tenure with the previous public protector, Thuli Madonsela, a determined and honest person at the head of an institution with powers to investigate and seek redress can make an enormous difference.

The first problem that Batohi faces is the independence of the NPA, or rather the lack thereof. The public protector’s office is one of only six state institutions whose independence is constitutionally protected and that are specifically mandated to operate “without fear, favour or prejudice”.

Tragically, the NPA is not one of those six. The appointment of the head of the NPA has always been a political appointment, made by the president in order to achieve partisan objectives.

That Ramaphosa, uniquely, has tried to make the appointment of the new NPA head a transparent and non-partisan process by involving the legal profession in the selection, is to be commended. It does not, however, mean Batohi will not encounter political pressures.

It suits the Ramaphosa administration to be able to distance itself from the prosecutions for state capture that Batohi will now undoubtedly pursue with vigour. But it is going to be a different matter when the NPA’s attention eventually lights upon the criminal actions of some of those who bailed from the Zuma ship to muster under the Ramaphosa flag.

The issue of NPA independence is, at least theoretically, easily solvable. If the ANC wants a truly independent national prosecutor, it can simply bring a constitutional amendment to achieve that.

Admittedly, a constitutional guarantee of independence is worth little if it tolerates a process whereby party pawns continue to be appointed. The Auditor-General’s office and the Human Rights Commission (HRC) are both Chapter Nine institutions with legally assured independence, but with very different outcomes.

The AG has operated with exemplary impartiality. The HRC, however, is just the ANC’s puppy dog – trained by now to growl on command but, when left to its own devices, is not up to much more than shedding hair on the furniture and piddling all over the floor.

More intractable is the other major hurdle facing Batohi: that of the NPA’s competence. She inherits an agency that is dysfunctional, divided and neglected.

The problems of the NPA are never going to be solved simply by a new director, no matter how impressive her credentials. What is needed is a fundamental change in attitude by the ANC towards the institutions that were set up to protect human rights and constitutional democracy.

Get your boycotting boots on, and let's start tackling some issues!
2 hours ago
2 hours ago
PREMIUM!

Orchids and onions: Chicken Licken's nuggets of wisdom win the day
1 day ago
1 day ago
PREMIUM!

Get your boycotting boots on, and let's start tackling some issues!
2 hours ago
2 hours ago
PREMIUM!

Orchids and onions: Chicken Licken's nuggets of wisdom win the day
1 day ago
1 day ago
PREMIUM!