Yep, it looks like Stats SA has trouble counting

It appears that our school maths outcomes have taken hold in our official statistics agency, but it's not all bad news. Yip, it looks like our school maths outcomes have taken hold in our official statistics agency.

By my count, it would seem that the formal compensation figure in South Africa should be around 19.2% higher than the figure the statistical agency uses in its gross domestic product estimates for the non-agricultural formal sector.

This is good news for the country but does not reflect well on Stats SA’s counting abilities. Let me explain further.

On Tuesday, we learnt the wonderful news that employment in our formal sector grew by 16.4% between September 2014 and September 2018. You will be forgiven for wondering how this is possible given that the economy is very weak and unlikely to grow employment at the reported rate and levels.

It comes down to the adjustments that Stats SA has, since the early 2000s, been making to the number of people captured on non-farm payrolls. SA has adjusted the number of people it estimates to be in the formal sector (excluding agriculture) by 95% since September 2002.

Let me be clear: this is not job growth, this is simply better counting of jobs that previously existed.

Just to show how big the adjustments have been, I have compiled a table that shows when non-farm formal sector jobs were revised and by how much.

The table shows that the number of jobs in the formal sector has grown from just under 5 million to just over 10 million in the past 16 years.

However, as can be seen, the total number of people added by revisions to the dataset was 4.4 million, which means that in effect the SA economy created fewer than 1 million jobs by this measure, rather than 5.4 million, if one was to just look at the start and end numbers. 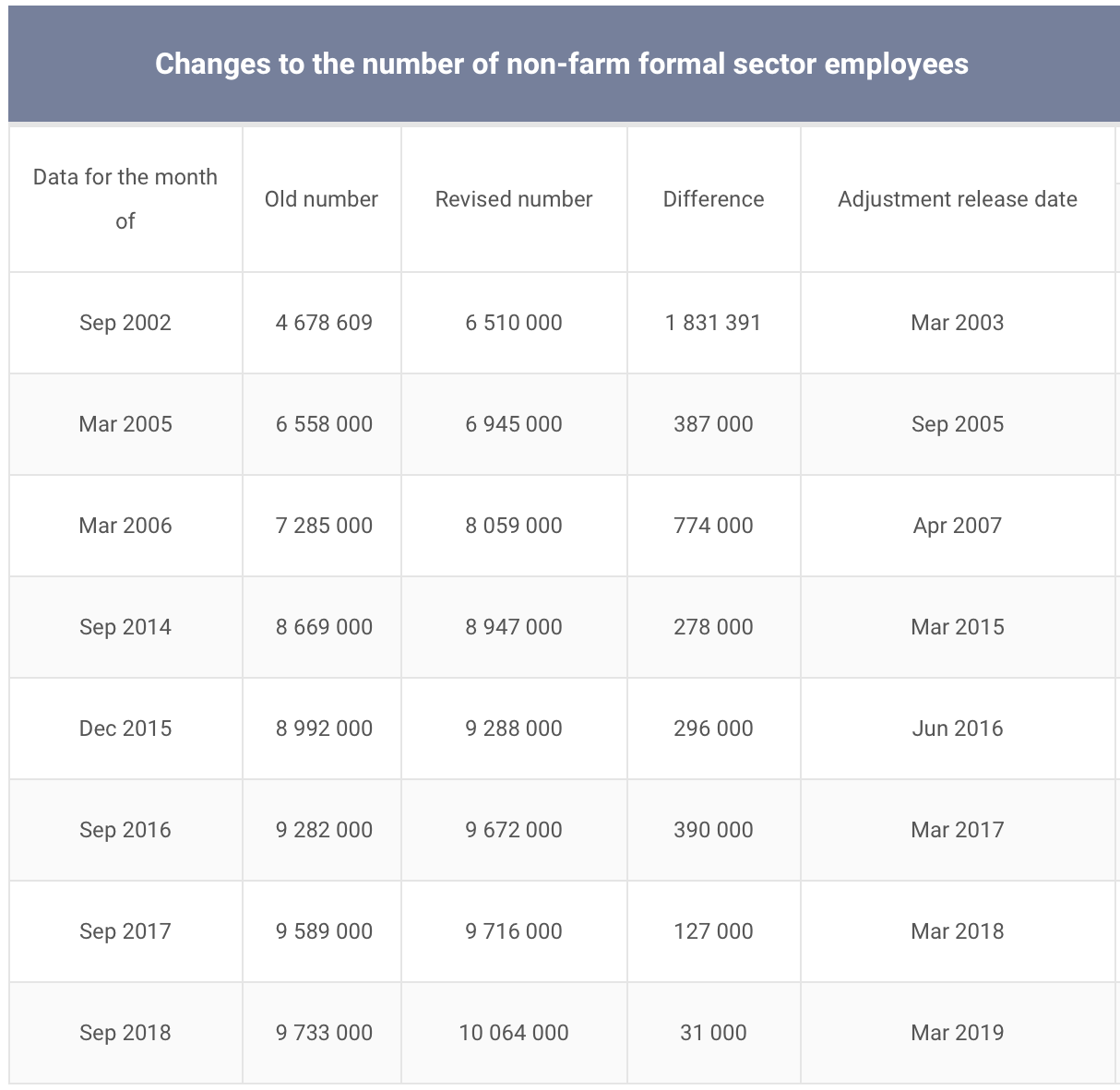 Since September 2014, all job ‘growth’ has come from revisions to quarterly employment statistics (QES) data. In total, the revisions of the number of people employed add up to 1,422,000.

Just the revision added to the original data means that in effect SA has lost 27,000 jobs since then, and not added 1,395,000 as reported!

In other words, the revisions show that there has been no formal sector job growth. This is not all bad. It means the formal sector has been bigger all along and so too the economy.

Most of the reasons for the revisions come from clues from other government datasets that are no longer available in the public domain, such as actual Unemployment Insurance Fund (UIF) collections.

Picture this: Employee X, retrenched from Company Y, heads down to the UIF offices to collect. However, Company Y is not registered for UIF, so the department of labour sends inspectors to Company Y – and Bob’s your uncle – Company Y, which employs 25 people, is registered for UIF. Do you see where the mismatch in numbers comes from?

What happened to UIF data?

Since researchers have become more interested in UIF data, it has disappeared from the public eye as the department of labour and the UIF no longer publish it in their annual reports or other publications.

So the formal sector in South Africa has not actually grown in over four years, as other data (such as business confidence and car sales) indicates. Think about it: if we really had added 1.4 million employees to the formal sector, don’t you think car sales would have shot out the lights over the past five years?

So the news stories you read about formal sector jobs growing are fairy tales – but there is a silver lining here.

If more people were employed in 2002 than we thought, then adjustments need to be made to the size of South Africa’s GDP (compensation is included in this calculation).

And if our GDP was, or is, bigger than we thought, then surely the ratings agencies would have had a different view on the economy? More on this in Part 2.