The rest of the continent is watching, SA

Why do the targets of these raids appear to be only of African origin? One hardly ever hears of Chinatown being raided for counterfeit goods. 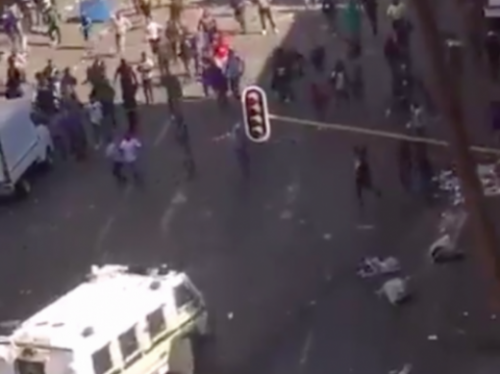 The streets of Johannesburg resembled a war zone on Thursday following the police raids of shops in the city centre.

The raids are apparently part of Gauteng Premier David Makhura’s O Kae Molao (loosely translated to “where is the law?”) campaign aimed at enforcing by-laws. Shop owners who felt hard done by banded together and fought back, in some cases pelting law enforcement officers with stones, driving them back.

Within a short space of time the narrative in the media had changed to “foreigners are attacking the police”. These were no longer just shop owners fighting to hang on to their goods, they were undocumented illegals simply taking on the men and women in blue. And that allowed the xenophobia choir to start singing: “they must just go back home.”

Does this mean Makhura and the authorities must not enforce bylaws for fear of backlash from other countries?

No, far from it. The law is the law and must be enforced. It is the manner in which this law is enforced that is being questioned. Confiscating counterfeit goods from shop owners makes for good television pictures, but is it effective?

The authorities know that raiding a shop or two in the city centre does not deal with the source of the problem. It is like arresting a street drug peddler and claiming a victory in the war against drugs. The distributors of counterfeit goods should be the starting point, not the point at which the consumer buys it.

Makhura and company choose to start at the wrong, ineffective end? That suggests the aim is not law enforcement but to be seen to be enforcing the law. Raiding informal shops and traders in downtown Joburg is the easiest way of making a spectacle, for everyone to see.

It is convenient, because the shop owners are already undesirable, undocumented illegals.

But going after the syndicates that import or make and distribute these counterfeits is hard work and could result in only one bust a year. Not good television.

The point is, the rest of the continent is asking: why do the targets of these raids appear to be only of African origin? One hardly ever hears of Chinatown being raided for counterfeit goods. Or any of the big malls for that matter. Counterfeits are not limited to street level only.

Joburg mayor Herman Mashaba and Makhura need to wake up to the fact that people do not commit crimes or break the law because they are not South African. They commit crimes because they believe the opportunity is there and they will not get caught.

Ridding Joburg of undocumented foreign nationals will not solve SA’s crime problems. Effective law enforcement coupled with an efficient judicial system will. Citizens (and non-citizens) must have a healthy fear of the law, knowing that it will catch up with them.

Ensuring that people who enter SA are documented will not be achieved through the chaotic counterfeit goods raids that are conducted.

The rest of the continent is watching and, soon, saying one is South African elsewhere will invite scorn.