If unemployment and stagnation is the catalyst to the current state of disarray, then the looters in government who have normalised stealing are the sickness that has led to this. 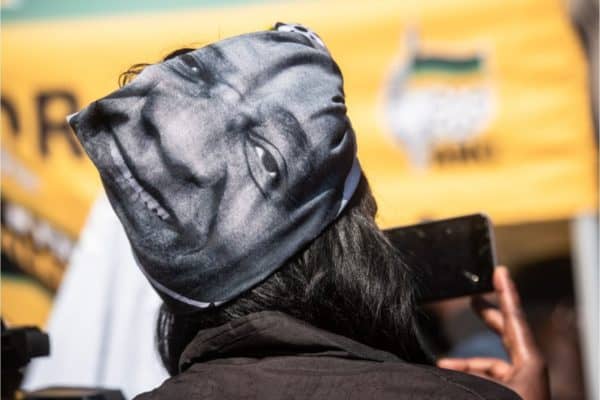 The face of President Cyril Ramaphosa worn by an ANC supporter during a protest outside the Israel Embassy in May 2021. Photo for illustration: Jacques Nelles

We must therefore commit ourselves not only to peace, but to greater economic opportunity for all. We are emerging now from a long period of uncertainty and stagnation. We have witnessed the effects of corruption and the erosion of the state, the terrible consequences of the abuse of power and neglect of duty.”

These are among the words pronounced by President Cyril Ramaphosa in an uninspired address to the nation on Monday night (July 12).

It was an address we had been eager to hear: a response to the alarming acts of violence and destruction that erupted in KwaZulu-Natal and had begun to spread to other parts of the country.

The significant thing was not the president’s apparent lack of conviction in his words, nor the state’s capacity to manage and rein in the destructive violence. Nor was it his clear refusal to admit that the country’s present predicament is his party’s fault.

Rather, it is the sense of self-importance that hangs over him and his administration.

Lest we forget, Ramaphosa was part of the top six of the ANC, and deputy president in the Zuma administration.

It is in wanting to distance himself and the administration he is leading from what he called “the effects of corruption, erosion of the state, abuse of power and neglect of duty” that he commits a disservice to South Africa.

It is wanting to distance himself from said ills – the neglect of duty, the erosion of the state, the abuse of power, and the effects of corruption – that reveals his politics.

It must be said, there are certain segments of our society that seem to want to separate Cyril the President of South Africa from the Cyril of the ANC. But they are one person.

As you sow, so shall you reap

Much of what is happening today – the violence, the poverty, the looting, the crisis of youth unemployment and lawlessness – is the fruit of the ANC government; one that Ramaphosa has been part of for decades.

He might have stepped out of active politics to pursue business interests for a while, but do not be under the illusion that he stopped being an active ANC member.

I have on several occasions written about the ruling party’s incapacity to change and adapt to being in government.

By this I mean the internal conspiracies and leadership battles that have seeped through to government functions, such that party functionaries use whatever power is bequeathed to them as government officials to scheme and advance their faction’s hold on or quest for power.

In turn, this leaves little time for public service, as has become clear in testimonies at the Zondo Commission of Inquiry into allegations of state capture. There is nothing much about a government of the people – ‘Batho Pele’ (‘People first’) – in their government.

Therefore, pardon my yawn when Ramaphosa’s eyes are wide open having “witnessed the effects of corruption” and the terrible consequences they have produced.

As if to show that his administration will not be tainted by the sins of the previous one nor tolerate the witnessed corruption, neglect of duty and abuse of power.

Furthermore, as the leader of a country in disarray, in blaming the preceding administration he may not be doing himself or South Africa any good – considering that he and most of his ministers were part of that administration.

There is no leadership.

The ruling party is sailing in choppy waters. This can be said of South Africa as whole. The shallows and miseries faced by this country add up to a long list and the events of the past few days attest to a government in crisis.

There is no visionary leadership to give us hope, no plan to reignite the economy, and no capacity to manage the pandemic. Chaos and insecurity reign.

We will ‘arrest and prosecute’

In his Monday night ‘family meeting’ the president called for the arrest and prosecution of those who are “involved in acts of violence” – while failing to rein in his comrades in government who are getting away with the far more violent criminal activity of stealing state resources, cronyism, tender-related corruption and rent-seeking practices on a grand scale, as witnessed in Covid-19-related procurement.I say where is this enthusiasm and determination to prosecute when it comes to these politicians?

If unemployment and stagnation is the catalyst to the current state of disarray, then the looters in government who have normalised stealing are the sickness that has led to this.

And this sickness will remain as long as the current president cannot declare that politicians, government officials and his party comrades will also be arrested and prosecuted – without fear or favour – for looting state resources.

I’m afraid the disillusioned citizens, the ones without jobs, income, food, and hope for better days have found a way to express their gatvol(ness). The incarceration of former president Jacob Zuma lit the fuse.

If it was not already obvious, the real fault of the political class has become apparent: as the government, they have failed to do what is good for the people.

The threat to democracy, at least in the immediacy, is not chronic unemployment and poverty.

It is politicians who exploit identity politics to boost their image of self as the perpetual victim who is always wrong – much like Zuma.

It is the leaders who will quickly distance themselves from the collective failings, the abuse of power, the effects of corruption, and the neglect of duty by an administration they were part of.

We would do well to remember that these leaders are peas in a pod, an ANC pod.

This article first appeared on Moneyweb and has been republished with permission. Read the original article here.