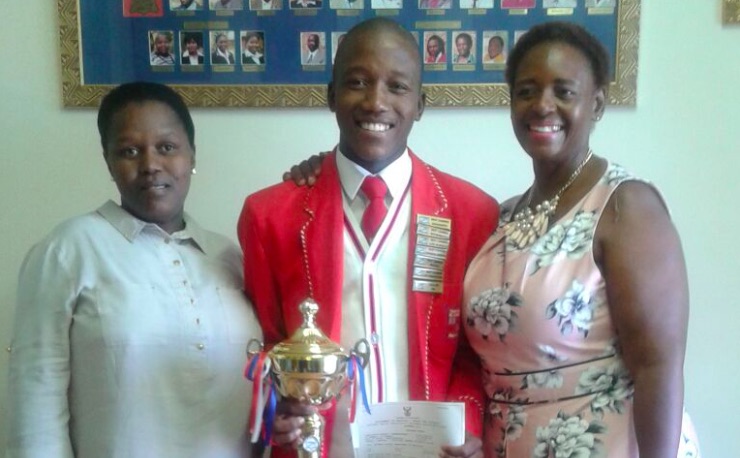 Neither a broken wrist nor the death of his brother could stop Ekurhuleni’s Tsakane genius Thembinkosi Johannes Manyeruke, 17, from shining, reports the African Reporter.

The young man was showered with awards on Thursday by the Gauteng Department of Education at a ceremony held in Daveyton.

Manyeruke received certificates and trophies for his distinctions, an award for being the top achiever across Gauteng township schools and the MEC’s special award, The Dr Harry Gwala Award, for full marks in three subjects.

“Growing up I wanted to be an information technology specialist or a mathematician, but as I grew up things changed.

“I continued working hard though, as I knew that if I did not get my desired results I couldn’t pursue my dreams,” he said.

When he reached Grade 11, in term four, he took first spot, while last year, in his circuit comprising of eight schools from around Kwatsaduza, he took top position every term.

He added that he had to sacrifice a lot for this success and attended morning classes, afternoon classes and extra lessons on weekends.

But two challenges came his way in the last two years of school.

“In Grade 11, I broke my right wrist during a soccer match which made it hard to write my final exams as my hand would be sore in the process, but I still topped my class.

“The biggest setback of all, in my matric year, was the death of my older brother in October,” he adds.

Through family support the young man sprung back and continued working hard.

He says he is happy with his results and the effort he put into his studies, and encourages other young people to work hard too.

“Matric isn’t hard, but you must know what you want, prioritise, sacrifice while others have fun, and isolate unnecessary things.

“I am thankful for the support of my family, teachers, school principal and all the people who helped us with the extra lessons.

“Most importantly I thank God because all I prayed for is coming true.”

“He was always dedicated to his work, attended all the time, and was not just the top achiever at the school but also at circuit level, which played a huge role in this result.

“Though our school pass rate has dropped, he has definitely lifted the school name and is a great example to others,” she said.

The youngster said he is looking at studying towards bachelor and honours degrees in mathematical sciences at the University of Pretoria.

All he needs now is a bursary to fund his studies.