'It was just chilling out in the open on the sea floor.' 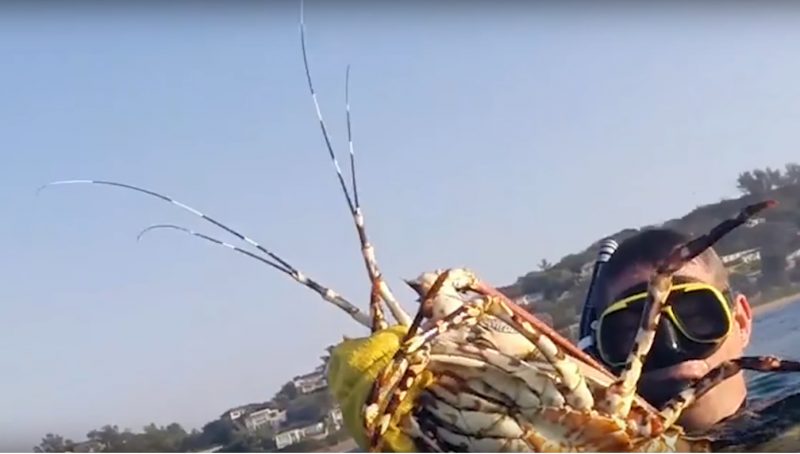 A video has been doing the rounds on YouTube recently of a ‘monster lobster’ caught at Tiffany’s Reef in Salt Rock.

While the catch was on June 23 2014, the video was only released on December 30 last year and features some neat aerial and underwater photography, reports the North Coast Courier.

Former Dolphin Coast local Leon Anderson – who now lives in Pretoria – said that he was surprised to have caught the crustacean, which had a tail measuring 75cm.

“It was one of my easier catches, it was just chilling out in the open on the sea floor,” said Anderson.

Lobsters usually hide in crevices on the sea floor making them difficult to pull out.

The video of Anderson’s thrilling catch got more than 1000 views on the day after it was uploaded.

Pieter van Wyk, a friend of Anderson’s, told The Courier how Anderson nearly lost his life in a freak diving accident a few years ago.

“We were about to launch from the rocks when he accidentally fell into (onto) his own diving knife and cut the back of his upper leg open all the way to the bone,” recalled van Wyk.

“His femoral artery was completely severed, as were all the nerves.”

“Luckily my brother and I were diving with him and applied emergency first aid by making up a tourniquet with a weight belt and diving gloves.

“He was rushed to the local clinic at first, where Salt Cafe is today, and from there he was transported to Stanger hospital for emergency surgery as Alberlito did not exist in those days.”

I was his “physiotherapist” for a few years and Leon is today walking and diving again, albeit one leg thinner than the other and a bit of a limp. Anderson remembers that after catching the massive lobster, Ezemvelo officers approached him to check his permit.

“It was very funny, they saw my permit but they never even bothered measuring the lobster – just took out their phones and started taking pictures.” Fishermen and divers are reminded that in terms of the Marine Living Resources Act a permit is required when fishing for East Coast Rock Lobster.

There is a bag limit of eight per person per day, of which all east coast rock lobster in your possession must be of a minimum legal size limit of 65mm.

No person may fish for east coast rock lobster during the closed season period – November 1 to the last day in February.

Two die, dozens in hospital after food poisoning at funeral in Kagiso
6 hours ago
6 hours ago

Two die, dozens in hospital after food poisoning at funeral in Kagiso
6 hours ago
6 hours ago