She says the ANC has not yet declared the succession debate open for public discussion and asked the media to give the party space. 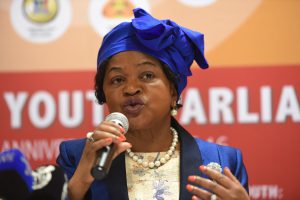 African National Congress (ANC) national chairperson Baleka Mbete has denied reports that she intends to throw her hat in the ring in the race to succeed President Jacob Zuma as the governing party’s next leader.

Speaking to Talk Radio 702 on Tuesday morning, Mbete said the ANC had not yet declared the succession debate open for public discussion and refrained from answering questions on whether or not she was available to stand for the top job, while admitting she had been approached to run for president.

At the weekend, the Sunday Times reported that Mbete said she had been “approached by many” ANC structures to run for high office.  The paper quoted her as saying that “after agonising for a long time” over it, she decided to make herself available for nomination.

Mbete raised concerns about the article, saying the media should give the ANC space to formally open the hotly contested succession race.

“We cannot have a discussion on air about a process that has not been sanctioned by the structures of the ANC, and personally I am just not happy with the way things are put in the newspapers,” she said.

Sunday Time also reported that she was surprised by the timing of the ANC Women’s League’s (ANCWL) announcement earlier this month endorsing outgoing African Union Chairperson Nkosazana Dlamini-Zuma as their preferred candidate to succeed Zuma when his term ends in December as ANC president.

She reportedly told the paper she did not believe the announcement by the league prevented her from entering the race, which has been largely led by frontrunners Dlamini-Zuma and Deputy President Cyril Ramaphosa.

“No, not at all. I mean, all it does is it clarifies the views of the leadership of the ANCWL … that’s all it does, it says they are also committing themselves to campaign and persuade other members of the ANC to agree to their position, that’s all. It does not say nobody else should be nominated,” she said.

According to the report, Mbete apparently has the backing of the ANCWL’s lower structures, and there were at least six ANC regions across the country that wanted her to take over party reins from Zuma, with Mpumalanga Premier David Mabuza as her deputy and National Council of Provinces chairperson Thandi Modise as ANC chairperson.

Dlamini-Zuma is said to have the support of the so-called “Premier League”, an informal ANC lobby group led by the premiers and party chairpersons of the North West, Free State and Mpumalanga. The group is purported to include the ANCWL, the MK Military Veterans’ Association and the ANC Youth League (ANCYL).

But in an interview with news agency Reuters last week, ANCYL president Collen Maine said the candidate the youth league would endorse for president would send “shockwaves” throughout the party, suggesting that they would not back either Ramaphosa or Dlamini-Zuma.

So far Ramaphosa has the backing of the ANC’s biggest alliance partner, the Congress of SA Trade Unions (Cosatu).