The EFF said it now regretted its role in putting the public protector into office. 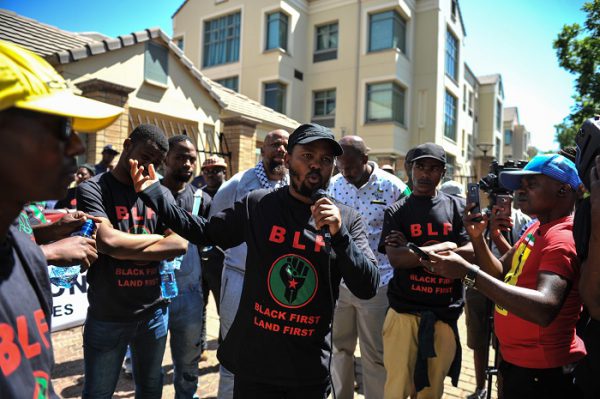 Andile Mngxitama addresses the other members of the Black First Land First movement outside the entrance to the public protector office premises after they marched from the University of Pretoria, 6 October 2016, Pretoria. Picture: Jacques Nelles

He said she was now being “insulted” because she was not afraid of “white monopoly capital”. He urged his supporters to forge on in calling for Absa bank to pay bank money it allegedly stole during the apartheid era.

“The sin of the Public Protector was to touch white monopoly capital and next being Johann Rupert. We must continue with #ABSAmustpay.

“The public protector was insulted because she doesn’t fear white monopoly capital. On our part we press on with #ABSApicket28jan.”

He was responding to EFF leader Julius Malema, who launched a scathing attack on the public protector, saying that her appointment had been a mistake and that she was a Gupta puppet and a spy. Malema said the EFF had thought it was worth giving Mkhwebane the benefit of the doubt because former public protector Thuli Madonsela could not have been replaced by a male public protector.

He said the party had subsequently grown disillusioned and disappointed that she proved them wrong because she’s apparently in the “Guptas’ kitchen”.

“She is a mistake … South Africa we regret supporting her. She is a Gupta puppet straight from the Guptas’ kitchen …once a spy always a spy. She’s proving without fail that we were wrong, please do not call her public protector,” Malema said during a press conference in Johannesburg.

“We were convinced that she should be given a chance, we argued that we could not replace an African woman with a male. We were wrong about her … she took over that office and immediately instructed that the TV channels in the office be changed to [Gupta-owned] ANN7 channel … if she was patriotic she should have chosen an SABC channel at least, but she went for the Gupta channel,” said Malema.

Mngxitama further returned to an old hobbyhorse by criticising the EFF for voting the DA into power, which he considers a party of white people.

“Whites oppressed us for 350 years. You give them political power to defeat the ANC and then it will be easy to remove them from power? Ja nee.”

The EFF voted for the DA to take over the metros of Johannesburg, Tshwane, and Nelson Mandela Bay following the local government elections, ousting the ANC for the first time since 1994.