The ANCYL accused the two government officials of having a direct interest in what happens at SAA. 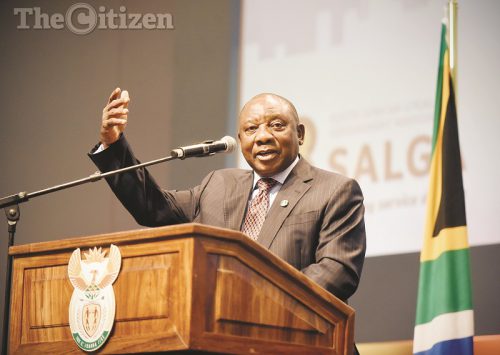 The ANC Youth League (ANCYL) on Wednesday stopped just short of calling Deputy President Cyril Ramaphosa and Finance Minister Pravin Gordhan corrupt, but it did say they had conflicts of interest.

The league accused the two senior government officials of ensuring the collapse of SAA to create space for private businesses they are linked to. It claimed Ramaphosa and Gordhan have interests in Bidvest and Comair, which they said had interests at SAA.

Speaking at a media briefing in Irene, outside Pretoria on Wednesday, ANCYL spokesperson Mlondi Mkhize said Ramaphosa and Gordhan have a direct interest in what happens at SAA.

“When SAA was moved from public enterprises to Treasury for a turnaround strategy, Minister of Finance comrade Pravin Gordhan appointed a consultant, who serves as a board consultant. That board tells SAA that it must take everything to Bidvest.”

Asked if the league were citing Ramaphosa and Gordhan as corrupt, ANCYL secretary-general Njabulo Nzuza replied: “None of us here are saying Pravin Gordhan or the deputy president are corrupt. There is nothing sinister with anyone in government owning shares in companies.”

But he added: “We are wary of leaders who protect companies that are not assisting in transformation.”

Nzuza called for an investigation into SAA to establish who is benefiting at the carrier.

Meanwhile, the ANCYL is said to be divided over who should replace President Jacob Zuma as ANC leader at the elctive conference in December.

League president Collen Maine said the ANCYL was not in a hurry to talk about names. He would only say: “There would have to be engagement and, at the end of the day we will have arrived at a decision on who is the right candidate to lead the ANC.”

The ANCYL want a leader who is keen on advancing the establishment and functionality of the state bank, land restitution and has a big appetite for collapsing white monopoly capital.

Maine called on the ANC to act against senior party leaders who were making pronouncements about who should succeed Zuma or availing themselves.

“The ANC’s national executive committee has taken a decision that we must desist from talking about names and availing ourselves as we have seen other people doing,” he said. “Everybody will be reprimanded, including our own provincial structure in KwaZulu-Natal.”

Ramaphosa has indicated his availability for the top job.