Residents in that area were not at all fazed by the gruesome killing. 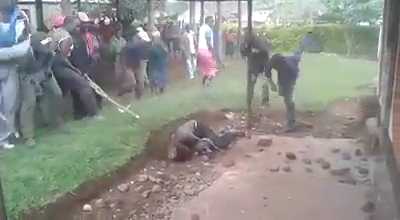 A young man in Pietermaritzburg who was beaten to death by a mob in a video circulating on social media can be seen lying in a gutter while residents take turns pelting him with rocks, hacking him with a pick axe and a garden hoe and eventually dropping a large concrete block on his head while dozens of onlookers bay for more blood, Public Eye reports.

The incident happend on January 25 in Dambuza when community members accused Nathi Mthembu of stealing pots, a TV and radio and some other household items from a home in the area and selling the items to other residents in the area.

In an attempt to piece together Mthembu’s last moments, Public Eye spoke with residents in that area and were not at all fazed by the gruesome killing, saying that Mthembu had brought it upon himself.

“When news of the theft spread, residents in the area began rounding up known thieves and began demanding to know who was responsible for the burglary. The first group of known thieves denied being involved, and they were allowed to leave.

“But when two other young men were rounded up, the community demanded answers and started getting angry. The community members were furious at the two, and they focused on one in particular, who they started beating up until he admitted it was him who stole a set of pots. They continued to beat him up while dragging him to point out his friends who were also involved,” said residents who witnessed the ordeal.

The assault on the other victim was not captured in the clip that has been circulating on social media. It is not known at what stage Mthembu succumbed to his injuries, but throughout, the clip the crowd bays for more blood, swearing at the lifeless body and demanding that he confess to all his crimes.

Ward 21 councillor Bhekithemba Mkhize condemned the act of vigilantism but said housebreaking was rampant in the area.

“We don’t encourage the community to take law into their own hands but urge them to catch and report the criminals to the police,” said the councillor, who suggested that there was a link between the rise in crime in the area and the recent closure of eMatsheni Beer Hall in Retief Street by the municipality.

“These people have come back here, and they break into houses at night and run away in the morning. What is more painful is that these kids who are doing this are coming from our community,” Mkhize added.

He called for regular police patrols both day and night in the area.

Mthembu’s grieving family said they could not say anything publically, as family elders still had to be consulted.

But instead of compassion for the family and regret that a young man was brutally killed, residents in the area said Mthembu deserved to die.

“He was stealing in order to finance his Whoonga addiction. I don’t feel sorry for him; he deserved to die. You can’t go around stealing from people. Now we can sleep peacefully. Not that he was the only thief, but he was worse than them all,” said another community member.