Work resumed on the controversial project after the department agreed to pay Khato Civils the R256 million owed to the company. 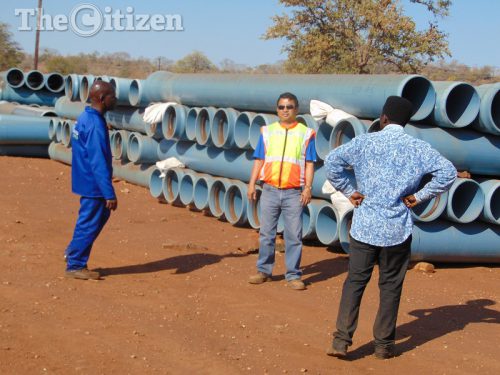 Some of the pipes lined up waiting to be installed at the project in Giyani. Picture: Alex Matlala

Disillusioned workers at the Limpopo presidential water project in Giyani have resumed work after a month-long standoff with Water and Sanitation Minister Nomvula Mokonyane.

The Citizen can reveal that Mokonyane’s department, which is responsible for bulk water in SA, owes a Midrand based company called Khato Civils a service fee amounting to R256 million.

The department confirmed on Thursday it had outstanding payments with the company for at least two unpaid invoices.

Dubbed government emergency intervention, the R2.8 billion project was initiated to provide water to the more than 155 Giyani villages and surrounds for daily use.

The area was declared a disaster town in 2009 and has since been providing the local community with polluted water, that allegedly caused villagers to be hospitalised at the Nkensani Hospital and diagnosed with cholera and other opportunistic waterborne diseases.

President Jacob Zuma ordered Mokonyane to intervene by appointing a service provider on a turnkey basis to change the poor water situation of the area for the better.

Part of the company’s obligation was to construct new water- treatment plants, build several waste water treatment plants, drill new boreholes that would augment the current supply of water in the town’s 155 villages and draw water from Nandoni Dam to the arid lands of Giyani, said the department on Thursday.

Khato Civils chief executive, Mongedzi Mnyani, told The Citizen the company was unable to carry out its day to day duties on site due to Mokonyane’s failure to pay them two invoiced certificates.

He said in light of this, subcontractors were pestering them about payment and that the company was unable to resume work on site.

Mnyani said the company decided to go back on site this week after a month of downing tools because the department had made a commitment to pay them before the end of this week.