One of two suspects who shot at the police has been arrested while his accomplice is on the loose. 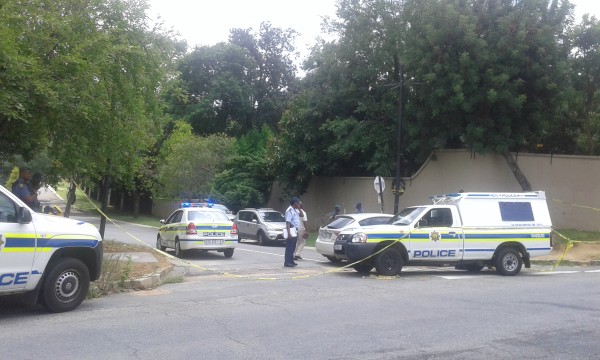 Police collect evidence in Ferndale after a shootout in which no was injured.

One of two suspects, who shot at the police after a chase earlier today in the north of Johannesburg, has been arrested, while his accomplice is on the run, Randburg Sun reports.

The officers were patrolling in the Ferndale area when they spotted two men outside a home.

As they neared, they suspected that the men were trying to gain entry to the property on York Avenue. As soon as the suspects spotted the police, they ran to their vehicle, which was parked outside the gate.

A chase ensued, and one of the suspects allegedly started shooting.

“Police retaliated, and the suspects got out of the vehicle and continued to run on foot,” he said.

The officers managed to chase one suspect down and arrested him. His accomplice managed to escape. It is believed he is armed.

No one was injured during the incident.

This is a developing story, and updates will follow as they become available.