A political party that promotes the SAA chair's leadership alleged on Tuesday Gordhan was 'instructed' to axe Myeni before he can himself be axed by Zuma. 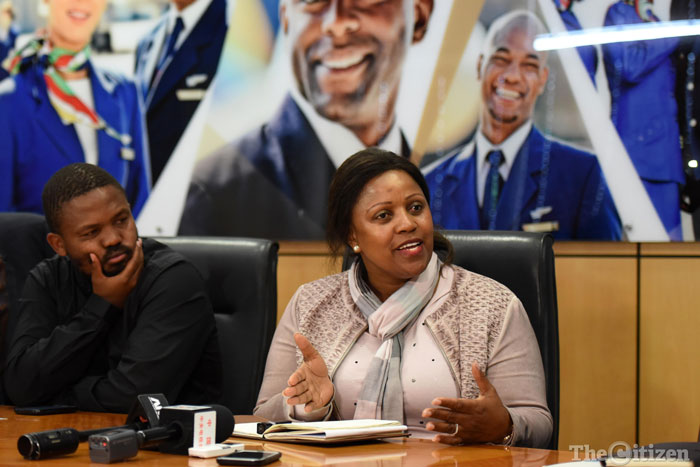 SAA Board Chairperson, Dudu Myeni speaks as she engages with a group of stakeholders on the state of SAA at Airways Park in Kempton Park, 8 September 2016. Next to her is Andile Mngxitama. Picture: Neil McCartney

UPDATE: Treasury spokesperson Yolisa Tyantsi contacted The Citizen on Tuesday afternoon after this story was first published to take issue with how Treasury was contacted for comment.

She advised The Citizen to further interrogate the BLF as to its sources, which she said were not accurate.

She further explained that they took issue with The Citizen’s speculation that Tyantsi may have been in any kind of board meeting. “I was just in a meeting. It wasn’t an SAA board meeting. That didn’t happen.”

The phrase that Treasury “would not say if it was the same board meeting the BLF was referring to” has been redacted as this was, indeed, speculation. The phrase “Later in the morning, it became apparent that they were unwilling to comment on the matter for the moment” has also been redacted and updated with the comments above.

Below is the original story that ran earlier this afternoon.

The party alleges Andrews will return to SAA through Brain & Company, a management consultancy firm that was previously tasked with managing the merger of South Africa’s three state airlines – SAA, Mango and SA Express, according to information from Public Enterprises Minister Lynne Brown – at a cost of R12.1 million.

The BLF, which is led by Andile Mngxitama, alleges the minister has been “tasked” with ensuring that state-owned enterprises (SOEs) are privatised in the interest of what they call “white monopoly capital”.

The party, which has always fought to defend and promote the work of the SAA chairperson (someone they appear to have close access to), claims the finance minister “has been instructed by [Johann] Rupert and co” to act fast in removing Myeni – allegedly something that needs to be done before President Jacob Zuma can remove Gordhan as finance minister. Gordhan’s removal has been expected since the beginning of the year, with much talk of an imminent Cabinet reshuffle. Zuma allies such as former Eskom boss Brian Molefe and even Nkosazana Dlamini-Zuma have been named as possible finance minister replacements in the speculation.

“Pravin Gordhan is tasked with ensuring all SOEs are privatised in the interest of white monopoly capital (WMC),” the BLF’s national spokesperson Lindsay Maasdorp told The Citizen.

He again touted what he said were the successes of Myeni at the airline. “Dudu Myeni has resisted and turned around SAA, ensuring an over R4 billion saving.

“Gordhan and WMC have been frustrated and they have since insisted the return of Coleman via Bain and co to ensure that WMC gets what it wants.

“Gordhan knows that President Zuma is likely to remove him as finance minister and thus he has been instructed by Rupert and co to act fast in relation to SAA as well as Eskom.

“Gordhan has thus been instructed to fire Dudu Myeni and pave the way for the privatisation of SAA, which will also see massive job losses. This despite turning SAA around from the astronomical losses under Viljoen and Coleman, who bankrupted the national carrier.”

Coleman’s departure from SAA had also been hugely controversial since he was given a then record-breaking “golden handshake” payment of R232 million. This happened in 2001, even though the airline posted a net loss of more than R 700 million for that year.

The BLF added: “Today’s board meeting will test the resolve of black resistance against white monopoly capital and it’s agents.”

When The Citizen called Treasury for comment, they initially appeared willing to speak “after they came out of a meeting” [Correction: Treasury’s spokesperson has asked The Citizen to reflect the fact that Treasury had only asked for queries to be sent by email but there was no “willingness or unwillingness” to comment on the matter in either event and they have subsequently commented].