Areas such as Hennopspark and Clubview had been plagued with numerous burst water pipes and sinkholes. 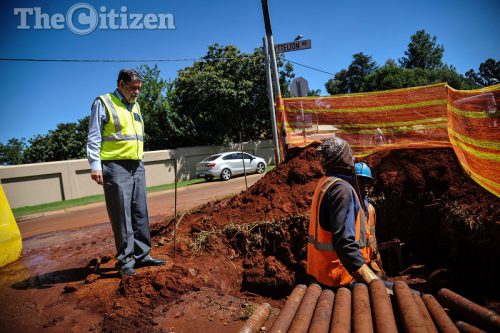 Fears of property-damaging sinkholes receded as the Tshwane MMC for infrastructure Darryl Moss handed over a project site to contractors on Thursday to start replacing water pipe networks in Centurion.

Areas such as Hennopspark and Clubview had been plagued with numerous burst water pipes and sinkholes, with at least 22 unrepaired sinkholes in the area.

Moss said the water reticulation network pipes in those areas were ageing 75mm asbestos cement pipes that were close to five decades old.

“These pipes have passed their design lifetime and are starting to burst as asbestos becomes brittle. The breaks go down the pipe, creating cracks.

“A burst pipe can be fixed in one place but a week later, the pipe bursts elsewhere. It is far more beneficial to replace the pipes than to repair them,” he said in Centurion yesterday.

The R3.3 million contract will replace at least 1 309 metres of pipeline, including replacement of all valves, communication pipes and water meters, if required.

“A total of R16 million has been made available in the 2016-17 financial year for the replacement of worn water networks and a further R1 million ring-fenced for lengthening of water pipelines.”

All paving, concrete and road surfaces damaged during construction will be repaired.