The police are accused of standing by while foreign-owned shops are looted and people are killed. 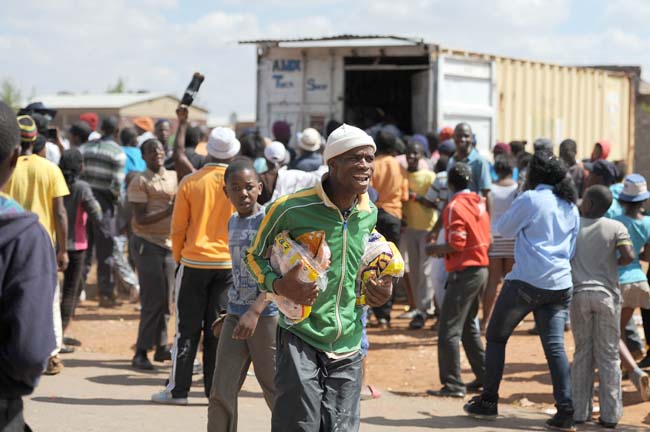 A young man runs off with stolen goods from a looted tuckshop during riots in Simunye on the West Rand, 24 October 2013. Rioting began following protest action in neighbouring Bekkersdal and a mass order to remove pupils in the area from schools. Picture: Refilwe Modise

The SA Police Service (SAPS) came under fire from Lawyers for Human Rights (LHR) for not always acting in the best interest of foreign nationals, especially when they or their property are under attack by South Africans.

Mametlwe Sebei, coordinator for the Coalition of Civics Against Xenophobia and lawyer for the Lawyers for Human rights (LHR), said for this reason they have set up their own interventions in the form of community patrollers to react once an immigrant is under attack.

The coalition has set up a helpline WhatsApp group for foreigners because “policing in many ways seem to be condoning it (attacks)”.

“We have seen incidents where basically police are just standing by watching as the shops are looted and people are killed,” Sebei said.

“We are demanding community oversight to policing. In Atteridgeville, for instance, one of the main driving forces behind the coalition, police for a long time were exhorting protection fees and informal taxation from mainly Somali small traders. But because of the intervention of communities this has been lessened.”

The Justice, Crime Prevention and Security Cluster also expressed concern on Wednesday at “inflammatory remarks” made by South Africans and foreign nationals against each other on social media.

JCPS spokesperson Siphiwe Dlamini said: “The threatening posts have been escalating since the recent attacks on homes and property occupied by foreign nationals in Johannesburg and Tshwane. The cluster calls for these acts that only seek to divide our communities to stop.”

“There is no place in our constitutional democracy for citizens and/or foreign nationals to take the law into their own hands and incite violence. Communities and individuals who feel threatened should follow lawful channels,” Dlamini said.

“We would like to assure all people in our country, including citizens and foreign nationals, that the security agencies are aware of the threats that are being circulated on social media.

“Security measures have been put in place to mitigate against any potential threat.”