In terms of the court order, Malema and the EFF may not incite any individuals to commit the crime of trespassing or occupying land unlawfully. 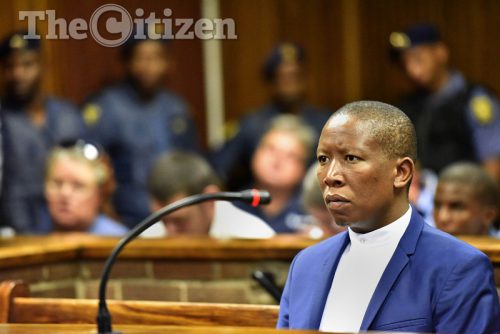 Economic Freedom Fighters (EFF) leader, Julius Malema inside Bloemfontein Magistrate’s Court in Free State, 14 November 2016, during his court appearance on charges relating to the alleged contravention of the Riotous Assemblies Act, which prohibits gatherings that might be deemed a public disruption by the State. Picture: Nigel Sibanda

The Economic Freedom Fighters (EFF) and its leader Julius Malema have been interdicted by the High Court in Pretoria from inciting people to illegally occupy land.

Judge Peter Mabusa granted default judgment against Malema and the EFF after they failed to defend an interdict application by business rights watchdog AfriSake and civil rights organisation AfriForum.

In terms of the court order, Malema and the EFF may not incite, instigate, command or procure any individuals to commit the crime of trespassing or to enter any land without the permission of the owners or lawful occupiers of the land. The court also granted a punitive costs order against them.

The organisations launched the application in November last year after Malema continued with threats that the EFF would from April 6 occupy land throughout the country.

AfroForum’s security coordinator, Tarien Cooks, said the organisation had put the EFF on terms last year to stop inciting people to grab land, as it was a crime.

The EFF reacted to this by threatening that they would take land without compensation and that the land would be redistributed.

“These threats are in direct contravention to the Constitution and international law. It is a violation of the rights of land owners, which is why AfriForum and AfriSake obtained the court interdict,” she said.

“AfriSake regards private landownership as one of the cornerstones of a flourishing economy based on a free market system,” AfriForum business analyst Armand Greyling said.

He warned that any threat or undermining of private landownership would discourage local and international investors and would lead to capital flowing out of the country. Cooks said if Malema or any member of the EFF contravened the interdict they could be charged with contempt of court and even incarcerated.

AfriForum is now planning a conference about what a landowner’s rights are and what should be done if the land is illegally occupied.

Malema has appeared in both the Newcastle and Bloemfontein magistrates’ courts on charges of contravening the Riotous Assemblies Act by calling on EFF members to illegally occupy land.

Both trials have been postponed pending the outcome of Malema’s application to have the act declared unconstitutional and unlawful. AfriForum was the complainant in the Bloemfontein court case against Malema.

A defiant Malema told supporters outside court they should not be scared of prosecution and once again encouraged them to occupy land, which he said “was taken by white people through genocide”.