The Voice of the Unborn Baby said they wanted the parents of stillborn or miscarried babies before 26 weeks to be given the right to bury their offspring. 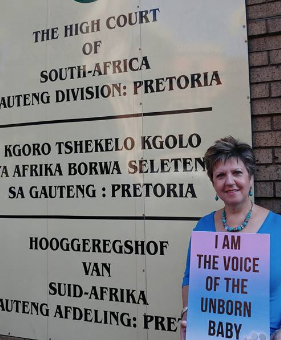 Laurika Steenkamp had lost her twin baby girls after a pregnancy of just 23 weeks but was never allowed to bury her twins, or say goodbye to them because their tiny bodies were automatically incinerated as “medical waste”.

On Wednesday, the Cape Town mother participated in a demonstration outside the North Gauteng High Court in Pretoria where she and fellow members of the organisation The Voice of the Unborn Baby filed an application aimed at changing legislation.

This would allow grieving parents who had lost their babies before 26 weeks’ pregnancy the choice to bury or cremate their offspring.

“We want parents of stillborn or miscarried babies before 26 weeks to have a choice, because at present if they [the offspring] are under 26 weeks [old] you do not have the option to receive the bodies. They [the bodies] are seen as medical waste.

“For parents and also siblings going through this, there is no closure, no ceremony.

“Already you’re going home with empty arms, and the emptiness just continues because you’ve got nothing to say goodbye to.

“Saying goodbye is for the people that stay behind. It’s important, and a lot of relationships don’t last through something like that.  It’s almost as if you’re not allowed to grieve because the baby was never there and under our law you can’t regard that baby as a stillborn child.

“When my twins were born at 23 weeks I didn’t have guidance about what to do and how to do it, so I didn’t make the right choices. I wish I did.

“A year later I started dreaming that they were looking for me in the hospital, so I went back and asked them what did they do with the bodies, because I never asked. I just pretended it never happened.

“A youngish doctor said to me they were incinerated as medical waste. And that was my answer,” Steenkamp said.

“For another year I avoided everything, but after three years the wheels came off and I was diagnosed with major depression and put on medication.

“If one can change legislation and there’s better guidance, more people don’t have to go through this,” she said.