Ongoing reaction has left some wondering if EVERYONE will simply be boycotting Spur from now on, no matter how good the sauce is. 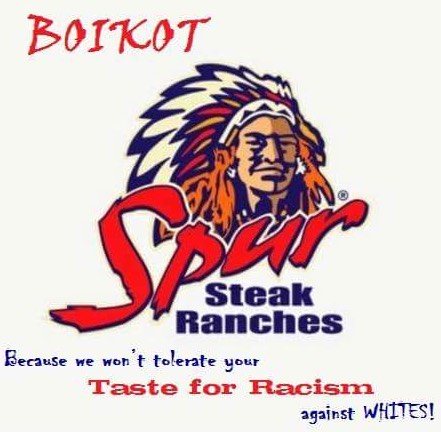 Picture: Twitter screenshot on one person campaigning against Spur for allegedly being against white people

In the wake of an incident in which a man threatened to “klap” a woman in a Krugersdorp Spur outlet, many on social media have joined a call to boycott the restaurant franchise.

However, there’s now confusion around exactly who’s making the call and exactly why they’re angry.

Spur in a statement apologised to the woman in the video, Lebohang Mabuya, and confirmed that their own CCTV footage showed the man in the video had grabbed her child “in an aggressive manner and his actions are unacceptable”.

In a statement, Spur said: “We have reviewed our CCTV footage of the incident and can confirm that Ms Mabuya’s version of events is accurate.

“We affirm our decision to ban the male customer from our stores. Physical aggression towards our customers‚ particularly against women and children, will not be tolerated.

“We acknowledge that the staff and management of the store did not sufficiently assist Ms Mabuya. We have addressed this with the store management and we are reviewing our internal procedures to ensure that restaurant staff are better equipped to manage an incident such as this. We also recognise that Ms Mabuya apologised in recent media statements for her inappropriate language used in this incident.”

Spur CEO Pierre van Tonder also said they planned to offer Mabuya and her family trauma counselling and any other support where possible.

“I would like to again make it very clear that as an organisation we do not condone any forms of violence against women or children‚ irrespective of the circumstances.

“As an organisation we have learnt a valuable lesson and it is my priority at this stage to ensure that should something like happen again‚ our staff will be sufficiently prepared.”

Additionally, though, it has also been alleged by an eyewitness that the woman swore at the man before the subsequent exchanges were captured on film.

This has now led to some white people alleging that “Spur has lied” and now they want to boycott the franchise.

#Spur upon hearing that both white and black radicals now wants to boycott them. ???? #WTFjustappened!?!? pic.twitter.com/ZRarxCbGDF

Former editor of The Mercury Fikile-ntsikelelo Moya took to Facebook on Wednesday afternoon to ask: “Can someone please explain why Spur has to be boycotted or punished in any way because one of their clients proved himself a misogynistic and racist prick? How is Spur culpable for the actions of someone who doesn’t work for them or was in any way representing them? What are you accusing Spur of?”

Aphiwe de Klerk felt that the boycott was justified because: “The argument is that they failed to protect a paying customer during the incident. Apparently there were four managers at the store but their concern was to stop other customers from leaving, instead of intervening and calming the situation down. My take is that if I am your paying customer, it is your duty to ensure that I don’t feel unsafe while at your premises.”

Moemedi Kepadisa also felt that “They could have done more…”

But Maseipati Tsotsotso said: “Spur is a family restaurant, not a military boot camp with bouncers at the door. Spur had nothing to do with unruly parents.”

Karen Lotter added: “It isn’t the fault of Spur, but I do believe that establishments, especially those where booze is served, should train managers and staff in conflict resolution. I feel terrible for those poor kids who had to experience this. That whole episode should have been stopped right when it began, before it escalated. Sadly white men have been able to get away by intimidating and bullying black people for centuries. I hope the woman sues him.”

EFF members have named the man in the video and that they intend to go and “have lunch with him”.

I eat ko di tenteng and ofc. this boycott #spur people are talking about doesn't including me. ???? pic.twitter.com/xzd4S0iHt0

A boycott wouldn't be such a bad idea….@SpurRestaurant #Spur
It's our hard earned money that keeps them in business.

Ya'll want us to boycott Spur now? You out of your gadamn mind. That white sauce taste too good. I ain't that mad