Malema: If ANC MPs could vote against abortion, why not Zuma?

While he says he is aware ANC MPs will not speak out against Zuma out of fear of their 'skeletons', the EFF leader says he is only asking them to do the right thing. 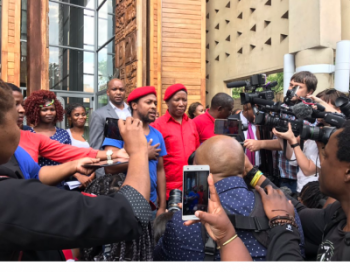 Speaking to the media outside court, Malema said his party tried everything and followed protocol to have the president account for his actions, but nothing helped.

If the party’s application is successful, the president will answer to parliament, the same way Minister of Social Development Bathabile Dlamini did on the Sassa saga. The public would also have the opportunity to have the president answer to them, said Malema.

“Some say court can’t order the president to step down. True. But parliament can be instructed to do its job. Court can assert to parliament that there must be a process to hold Zuma accountable. It’s our job as MPs. Parliament must do its constitutional duty. We are here to ask the court to ask parliament to do its job!”

The EFF leader, however, said he was not asking ANC MPs to vote with opposition against their own president. He said he only wanted them to do the right thing, and if they could not vote against Zuma, abstaining was also an option.

“Some ANC MPs voted against abortion because of religious conscience. This means they can vote out Zuma.”

But Malema said even though the majority of ANC members did not agree with Zuma, they feared speaking out because “he will expose their skeletons”.

Malema said they had to do all that before the president could fire Minister of Finance Pravin Gordhan because, once that happened, it would be over.

The EFF leader also criticised the intelligence report that the president was allegedly planning to use to justify his sacking of Gordhan, saying it was a propagation of stories and “many untruths”.

“They say Pravin’s tour in London is aimed at collapsing the economy. But they have no evidence to prove this,” he said.

The EFF announced its decision to approach the ConCourt on Thursday to help in making the president be held accountable for his Nkandla scandal and “lying” to parliament on “numerous occasions”.

“Tomorrow is exactly one  year since the ConCourt handed down its historic judgment in the EFF’s Nkandla application. Since then we have made numerous appeals and wrote several letters to the Speaker of Parliament. All have fallen on deaf ears and have been met with violence by Parliament on EFF MPs.

“We approach the Constitutional Court as a last resort based on the belief that Zuma’s conduct around the Nkandla matter, both inside and outside of Parliament, renders him unfit to hold the high office of President of the Republic of South Africa,” it said.

The Democratic Alliance (DA) on Thursday also tabled a motion of no confidence in the president that will be debated and voted on when parliament is back in session.

“Zuma has threatened our economy by dangling the possibility of firing Finance Minister, Pravin Gordhan, and his Deputy, Mcebisi Jonas, before the country, and before the world, by using a bizarre and seemingly last minute ‘security report’ to justify such removals. This is nothing more than an attempt at total state capture and cannot be accepted,” it said.

WATCH: Malema pleases the crowd by dancing with Fifi Cooper and co
5 hours ago
5 hours ago

Malema promises electricity and houses, implies the ANC doesn't care for its people
17 hours ago
17 hours ago
PREMIUM!

WATCH: Malema pleases the crowd by dancing with Fifi Cooper and co
5 hours ago
5 hours ago

Malema promises electricity and houses, implies the ANC doesn't care for its people
17 hours ago
17 hours ago
PREMIUM!