Ramaphosa and Mantashe's opposition to the reshuffle exposes the deep divisions within the ANC. 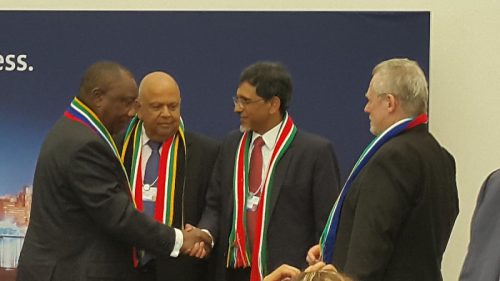 Deputy president Cyril Ramaphosa is not impressed with the removal of Pravin Gordhan from the finance portfolio.

According to eNCA, he said it was “unacceptable”.

Together with secretary-general of the ANC, Gwede Mantashe, Ramaphosa rejected President Jacob Zuma’s decision to fire Gordhan and his deputy, Mcebisi Jonas.

Ramaphosa said Zuma presented the top African National Congress (ANC) leadership with a “ready made” list of the new Cabinet without consultation.

“It was just a process of informing us of his decision, it was not a consultation because he [Zuma] came with a ready made list,” Ramaphosa told reporters in Bloemfontein, Free State.

“I raised my concerns and objection on the removal of the minister of finance … largely because he was being removed based on an intelligence report that I believe had unsubstantiated allegations about the minister and his deputy.”

He said the report, labeled as “shoddy” by the SA Communist Party (SACP), stated that the overseas trip by Gordhan and his deputy Mcebisi Jonas was to mobilise financial markets against the South African government.

“I found totally unacceptable that such a person who served the country with such distinction would do something like that. It reminded me of my own situation in 2001 … when an intelligence report said I was involved in a plot to overthrow the president Mbeki’s government … when this report came up it disturbed me greatly,” said Ramaphosa.

He said, at the time, he approached former president Nelson Mandela after the report surfaced, who then promised him he would handle the matter.

Commenting further on Gordhan’s axing, Ramaphosa said he told Zuma he would go public about his disagreement to remove the finance minister as the reasons were based on “spurious allegations”.

“I told him I don’t agree with him, and that I would articulate this publicly. So this is where we are … he has made his choice to appoint and remove ministers, and let me say it is his prerogative.”

Ramaphosa, along with other top six officials of the ANC, Jessie Duarte, Baleke Mbete and Zweli Mkhize, first learned of Zuma’s plans to reshuffle on Monday. The president also informed the SACP of his intentions.

The second time was on Thursday when the top six were again summoned to Zuma’s presidential home in Pretoria to urgently finalise the restructuring of Cabinet. That meeting lasted three hours, and Mantashe and Ramaphosa were again outvoted.

Speaking to Power FM shortly after the Cabinet reshuffle, Mantashe said the list of new ministers and deputies was imposed on them. He added, traditionally, lists were debated, but they were told to accept it.

Ramaphosa and Mantashe’s stances expose the deep divisions within the ANC, with certain factions outright coming forward to disagree with Zuma, further showing he does not have complete control of the ruling party.