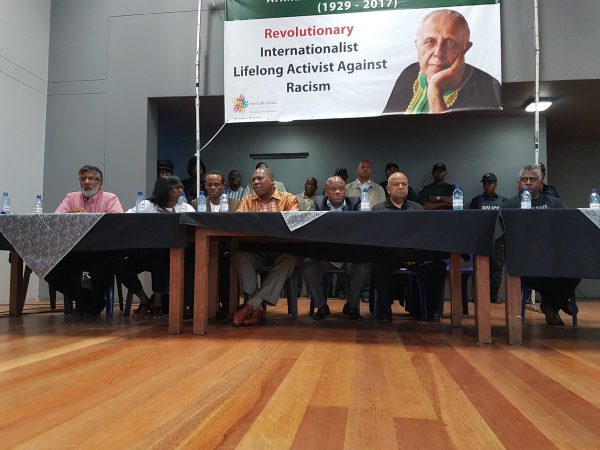 Durban – If there was one thing displayed at late struggle veteran Ahmed Kathrada’s memorial in Durban on Sunday, it was a strong show of support for President Jacob Zuma by provincial ANC members.

They sang songs in praise of Zuma, echoing throughout the hall, drowning out both Gordhan and Mkhize, who had issued a statement critical of the president’s Cabinet reshuffle earlier this month.

But Gordhan did not leave without getting a word in, calling ANC members ill-disciplined for their behaviour.

“We don’t know who disrupted whom there, everybody got disrupted. That’s very poor discipline on the part of ANC members, so have got to get that right,” said Gordhan.

Asked if his message had been fully delivered, Gordhan replied: “Adequately.”

WATCH: Zikalala says #KathradaMemorial's should not be used to reflect on the ANC. It's not in the party's culture to do so. #yj pic.twitter.com/5v8s9DevTf

The hall began filling up with ANC members as early as 1pm, according to organisers, who added that they had arrived by 11am for the event scheduled for 3pm.

They had mostly filled the chairs on both levels, but police did not leave anything to chance, as cable ties held chairs together –preventing any chance of them being thrown by disruptive members.

Police not taking any chances @ #KathradaMemorial. Chairs are tied with cable ties to prevent having any loose chairs @TheMercurySA pic.twitter.com/h6l5Yzo2bK

Pravin Gordhan outside the #KathradaMemorial venue where a young man thanks him. He was booed by ANC members attending, while speaking #yj pic.twitter.com/lXUr6uXG9F

A number of people, of all shades of the rainbow nation, who came to hear Gordhan speak had been turned away due to lack of space, while a tent just outside the hall was erected for others to watch the live feed.

Gordhan in his speech spoke of unity in the ANC.

And if “we don’t work together we are not going to be able to achieve” what Kathrada wanted for this country, he added amid the talking and shouting from the crowd.

“Comrades, let’s hear each other. It’s my turn to talk, it’s your turn to listen for now,” he told attendees.

“Anyone can make a nice deal today. Someone can pass on a nice bag of money, and we share the money, say we now have unity and we are not going to fight because we all have money. That’s not unity. Unity can’t be based on money.

“That is not Kathrada’s ANC. What we also want is an ANC that comrade Kathrada would say commits itself … to make sure young people have a very different life.

“We agree on the kind of South Africa we want and people must have a better life,” he added.

The ANC Youth League had been granted permission by a court ruling at the weekend to attend the memorial, but had to show good behaviour.

ANC KwaZulu-Natal chairperson Sihle Zikakala charged that the platform offered by a memorial service or funeral that was used to present a message of disagreement or divergent views was not correct, was inhumane, and did not display the culture of ubuntu.

Gordhan and his deputy Mcebisi Jonas were axed just days after Kathrada’s death at the end of last month, when Zuma announced a Cabinet reshuffle at midnight.

Gordhan has subsequently spoken out against the capture of the state at memorials around the country – except on this last occasaion.

Kathrada a year ago penned a letter to Zuma asking for him to step down. Parts of this letter were read out by former deputy President Kgalema Motlanthe at his funeral.