The president also took a swipe at the private sector on the question of salary disparities along racial lines. 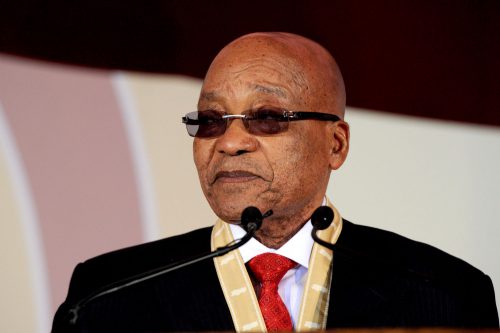 Speaking at the 24th commemoration event of anti-apartheid activist Chris Hani in Boksburg on Monday, the president said the alleged depiction of black people as baboons during the nationwide strike was proof that racism still existed in the country.

Zuma said it was “clear that some of our white compatriots [still] regard black people as being lesser human beings or subhuman”. This was in reference to the People’s March, which saw thousands of South Africans locally and internationally gather to call for the president to resign.

This after Zuma sacked former finance minister Pravin Gordhan, and his deputy, Mcebisi Jonas – actions that not only saw the rand plummet, but the country downgraded to junk status by international rating agencies Standard and Poor’s and Fitch Ratings.

Zuma called on the public to refrain from making racist utterances, and further indicated that the Prevention and Combating of Hate Crimes and Hate Speech Bill would deal with such issues once it became law.

“We have sadly not yet succeeded to build the nonracial society that we envisaged. There is a resurgence of racism in our country. It is also clear that racists have become more emboldened.

“The marches that took place last week demonstrated that racism is real and exists in our country,”

“Bua! [speak]” shouted some people in the audience.

“Many placards and posters displayed beliefs that we thought had been buried in 1994. Some posters depicted black people as baboons. It is clear that some of our white compatriots regard black people as being lesser human beings or subhuman.

“We are a nonracial South Africa, and we must fight for this. It is the most important struggle to win – that South Africa becomes indeed nonracial … nonsexist.

“In the fight to combat racism, we should look beyond only overt racist utterances and public displays that we saw during the marches last week. Racism is a gross violation of human rights and plunged this country into decades of conflicts in the past. We cannot allow and assist racists to take our country backwards.

“At a legislative level, government has published the Prevention and Combating of Hate Crimes and Hate Speech Bill. Once it becomes law it will criminalise several forms of discrimination, including on the bases of race, gender, sexual orientation, religion and nationality.”

The president took a swipe at the private sector on the question of alleged salary disparities on racial lines.

The president also talked about lack of transformation in the private sector, where he said senior management positions were “overwhelmingly white and male”.

“Reports by the Employment Equity Commission each year indicate that the top and senior management positions of top companies remain overwhelmingly white and male. Black professionals indicate that they are being overlooked for promotion in many companies.

“The private sector also needs to attend to the accusation that the salaries of black and white professionals doing the same job are still unequal in this free and democratic South Africa.

“These are serious transformation issues that cannot be ignored.”

They will all take part in mass action on Wednesday, April 12 – Zuma’s 75th birthday.