The EFF leader has called on the Constitutional Court to 'save lives'. 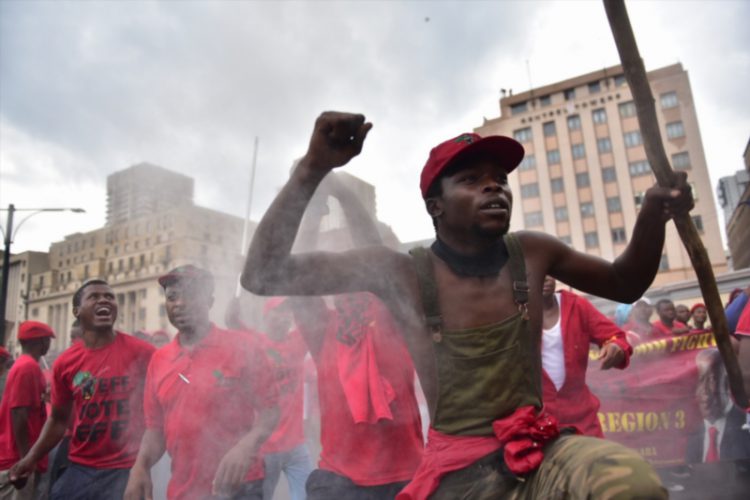 Protesters sing and chant during the National Day of Action march against President Jacob Zuma from Church Square to the Union Buildings on April 12, 2017 in Pretoria, South Africa. (Photo by Gallo Images / Alet Pretorius)

Leader of the Economic Freedom Fighters (EFF) Julius Malema has warned alleged pro-Zuma faction hitmen not to try to intimidate members of his party, more especially those who are in parliament, “because no one has a monopoly over violence”.

While addressing members of different political parties at the Union Buildings in Pretoria on Wednesday, the EFF leader said that, unlike “coward” ANC members of parliament (MPs), the EFF MPs will not be threatened because “we are not scared of them”.

Malema was referring to reports that Minister of Human Settlements Lindiwe Sisulu had received death threats for her apparent anti-Zuma stance. The EFF leader says the hitman who was hired to kill her instead went and confessed to her about the plot.

“Be guaranteed here, no one in the EFF is threatened. They will never take those chances of threatening anyone in the EFF. So, Mr [Sipho] Pityana, even here, there’s no incident of intimidation because the EFF is here. We don’t do those things of rhetoric.

However, he said that ANC MPs who were afraid of being killed for voting against Zuma during the motion no confidence in the president must worry no more because the United Democratic Movement (UDM) leader “General” Bantu Holomisa had them “covered”.

Malema further urged the Constitutional Court to “protect life” by enforcing that the vote of no confidence in Zuma be done secretly. The DA and the EFF have since asked speaker of parliament Baleka Mbete to postpone the debate on the motion of no confidence to allow the ConCourt to make its ruling.

Parliament has since said that only the DA can ask for the motion to be withdrawn.

“But don’t worry. We are arranging so you are not exposed. General [Bantu] Holomisa is making arrangements for those cowards of the ANC. So that they can do it secretly without their masters knowing. So cowards of the ANC, we’ve got you covered.

“The Constitutional Court must save life. Minister [Lindiwe] Sisulu was threatened. A person was paid money to go and kill her. That person went to her and told her ‘I’m given money to come and kill you because you don’t support Zuma’.

“And then they hire a person to go and kill her. Imagine if she votes against them and there’s proof from that electronic system in parliament … that she voted against Zuma. What will happen to her?