The department reportedly says it isn't aware of any major problems at the facility. 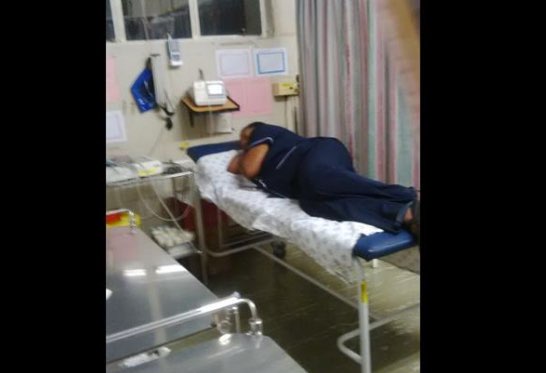 A nurse allegedly sleeping while on duty at the Standerton Hospital. Photo supplied

A picture of a nurse apparently fast asleep on a bed in the Standerton Hospital, Mpumalanga, as published by the Standerton Advertiser, has been shared widely since Thursday.

It was only the latest complaint in a series about the alleged poor state of both the hospital itself and the services it offers public health patients.

According to a family who spoke to the Advertiser, they did not receive any assistance to get their sick relative out of a vehicle upon arrival.

They said the nurses were rude and left them waiting for a long time and one was photographed sleeping on a bed in the casualty area.

The Standerton Advertiser had already published the details of two separate incidents in February about a woman giving birth in January and an elderly woman who broke her hip on the way to the bathroom in hospital. 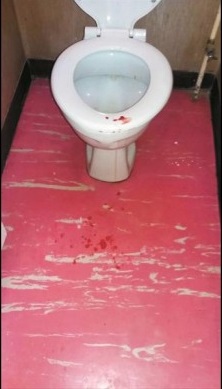 A toilet and floor at Standerton Hospital in March.

The department of health said they were unaware of any formal complaints about the hospital, but undertook to investigate, a promise they had already made in January.

According to the department, a complaint management system is in place for corrective steps to be taken, but little appears to have changed since the start of this year.

A patient also reportedly lodged a complaint with the department after a medical professional sent her medical information to her boyfriend.

According to her, the photos of the information on her file were sent on 23 June last year after the boyfriend discovered that she withheld certain information from him.

He allegedly asked the medical professional in question if she had access to the patients’ files and she replied that she did.

The man asked her if she could get him information from one of the files and she allegedly agreed and said he should provide the name and surname of the patient in question.

After receiving the information, the man confronted his girlfriend, all of which, if true, would have been in complete breach of patient privacy.

Another local family also spoke out about the alleged poor service their ill mother received at the hospital, which allegedly led to her death on 31 March.

The 68-year-old Anna Tshabalala was admitted on 25 March after she had been vomiting. 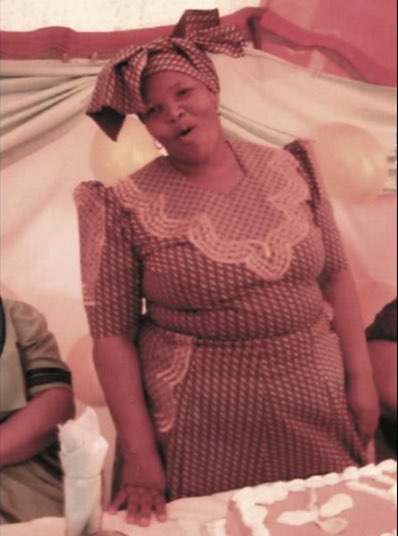 The late Anna Tshabalala, who died in the Standerton Hospital on 31 March.

Her children claimed they called the ambulance to no avail, and ended up transporting her in a private vehicle.

According to them, their mother could not walk upon arrival at the hospital and did not receive assistance getting her out of the car and into the facility.

They said they had to take her to the ward themselves after admission.

The family said things took a turn for the worse because their mother’s condition deteriorated.

“She could not speak, but used her left hand to communicate with us when we went to visit her the following day,” said her daughter Sibongile Tshabalala.

She also said her mother was lying in bed without a pillow and they were allegedly told to bring their own when they asked for one.

They said they went to see her on 27 March and she was in a bad condition and had difficulty breathing. However, she was clean and a drip had been inserted.

“We went to look for the CEO’s office to lodge a complaint and were sent from pillar to post,” her son Nkosinathi Tshabalala told the Advertiser.

Tshabalala said a health care professional told them there was a shortage of doctors at the hospital.

Earlier this year, a local couple also expressed their dissatisfaction after their experience.

Catharina Boshoff, a patient who was experiencing labour pains, was admitted to the hospital on 2 January. 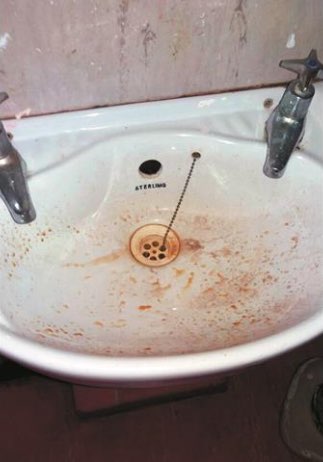 A basin in one of the bathrooms in March.

According to David Boshoff, her husband, she was in labour for 24 hours before giving birth to their baby boy.

“We arrived at the hospital during the day and the nurses changed shifts while we were still there,” he said.

He claimed they did not provide his wife with a blanket and pillows when she asked for it.

“She was told they were finished, but other patients were using more than one.”

According to the unhappy couple, the hospital was also not clean.

“There was blood on the floor, on the linen and on a toilet seat,” Mr Boshoff said.

The couple raised concerns about the nurses’ attitude, saying they were rude to the patients.

“They ignored patients who were calling for help,” Mr Boshoff alleged.

According to him, he was very worried about his wife and child because the nurses were so careless, but he was grateful she gave birth to a healthy baby the following day.

In the second case, an elderly woman who was apparently admitted to the hospital with diarrhoea fell and broke her hip.

According to her family, she was on her way to the bathroom when she fell.

They said a patient sharing a room with her called one of the nurses on duty for help.

The nurse allegedly handled the woman roughly, pulling her by the leg to the bed, while the woman was screaming in pain.

This elderly woman was later transferred to another hospital.

The department said in January that they monitor hospitals and the monitoring ranges from monthly, quarterly to annually. 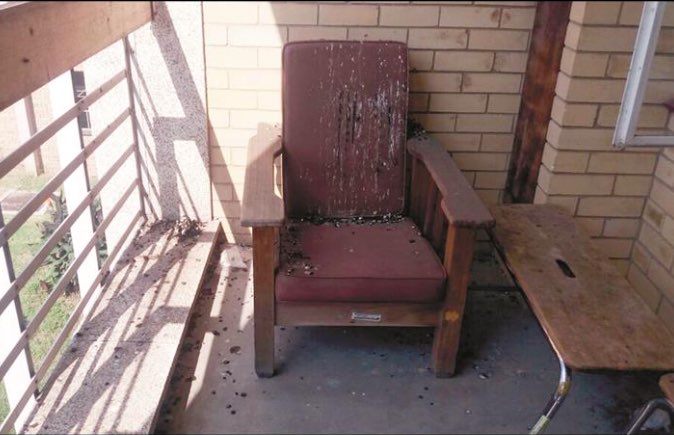 A dirty chair with even dirtier windowsill at the Standerton Hospital in March. Photo supplied

The department said unannounced visits were conducted to facilities for monitoring performance.

They also said there were annual national core standard inspections conducted by the district team.

According to the department, the facility had a complaint management system that enables clients to complain, and these complaints are opened weekly and are investigated, corrective actions are taken and feedback and redress are given to clients.

They said customer care training was conducted with all staff, educating them to treat patients well, and monitoring was done through dashboards for patients to give feedback on care received.

“Purchasing of linen for all the hospitals in the Gert Sibande District, including Standerton Hospital, is centralised at Bethal Hospital which has a regional laundry,” the department said.

They also said there was a schedule followed in the provision of linen to all the hospitals in the Gert Sibande District, where the linen is delivered twice a week and when the need arises.

Cele to unrest inquiry: I don't recall seeing top cop Sitole in the 'right places'
19 hours ago
19 hours ago

Cele to unrest inquiry: I don't recall seeing top cop Sitole in the 'right places'
19 hours ago
19 hours ago