The current protests are likely to get even worse, political analyst Elvis Masoga says. 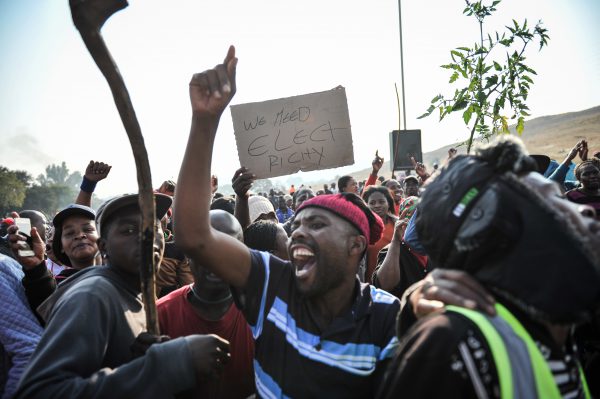 Residents from Iterileng informal settlement near Laudium block the R55 during a service delivery protest, 10 May 2017, Pretoria. Picture: Jacques Nelles

The violent protests gripping parts of Gauteng and North West are a clear sign of a democratic dispensation that has come to a point of mutual contestation between dreams and betrayal, says political analyst Elvis Masoga.

Several areas in Gauteng, including Eldorado Park, Freedom Park and Ennerdale, as well as Coligny in North West, have, for the better part of this week, been turned into “no-go” areas.

Masoga told The Citizen yesterday the dreams arose from promises made at the dawn of democracy in 1994, while the betrayal was epitomised by the self-enrichment on the part of under-fire President Jacob Zuma.

“Unlike the presidencies of Nelson Mandela and Thabo Mbeki, even though citizens then still had an ocean of hope in their leaders despite the problems they were experiencing, [Mandela’s and Mbeki’s] lifestyles were not suggestive of self-enrichment.

“Zuma, on the other hand, happens to be a catalyst of all sorts of protests and there is also deep-seated anger among citizens, which was occasioned by presidential madness,” Masoga said.

The current protests were likely to get even worse, he said, adding that the nation was hoping for Zuma’s presidency to come to an abrupt end.

“One of the reasons why the violent protests are likely to continue is if he continues to be president beyond the ANC’s elective conference in December, he is fronting his ex-wife, Nkosazana Dlamini-Zuma, to seek and secure a third term, despite the fact that the country is in need of a leader who has moral and ethical credibility – and at the moment, there is no presidential integrity that can stop the protests.

“A president with good morals stands a good chance to say to the people: ‘I’ve heard your concerns and have, therefore, tasked all Cabinet ministers to fasttrack a programme that will assist in terms of improving your living conditions.’

“But Zuma cannot do it because he is not wanted by workers, opposition parties or ordinary South Africans.”

Masoga said South Africa was leaderless, technically speaking, as the president who was supposed to calm angry citizens was nowhere to be found.

Nomfundo Mogapi, from the Centre for the Study of Violence and Reconciliation, said the situation was extremely worrying.

“What we have been witnessing is also a battle for human dignity while at the same time, government has been investing a lot in security issues as opposed to preventing the protests by engaging more often with residents about the issues of service delivery affecting them,” she said.

“You can’t, as a leader, only condemn the violent protests without doing anything about the grievances expressed by people and wait for a protest to happen before sending police officers to deal with them.

“This is also a sign of a panic-driven government.

“We are on a ticking time bomb and getting closer and closer to the point of no return.”

Johan Burger from the Institute for Security Studies said one of the main drivers behind the ongoing protests was the belief by many people that a change in leadership was needed.

“I hope the current ANC leadership will understand the serious threats we are facing as a country if the status quo remains.

“The violent protests are a warning sign that the country’s leadership has lost all credibility and legitimacy.

“We can expect the protests to also spread to other parts of the country and if government fails to firmly get the situation under control, it is likely to lose the opportunity to retake control.”

AREAS HIT BY PROTESTS THIS WEEK