The police are accused of having turned away the only eyewitness who implicated the murder accused. 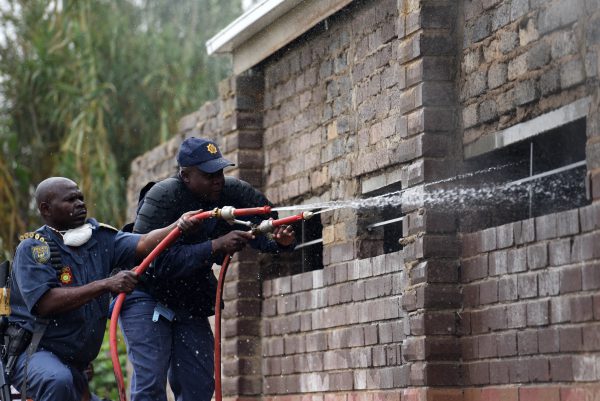 SAPS members distinguish fire at the house that was set alight by community in Coligny, North West, 10 May 2017, after two farmers, Pieter Doorewaard and Philip Schutte were granted bail for the murder of Wyle whom they accused of stealing Sunflower in their feild. Picture: Nigel Sibanda

North West police have denied allegations that when an eyewitness first went to report the killing of Matlhomola Moshoeu, the unnamed witness was turned away for being “mentally unstable”.

Speaking during a townhall meeting convened by the public broadcaster SABC in the besieged town this morning, a police representative told the gathering that the witness, who remains unnamed, was not turned away but had instead been “impatient when told to wait for an officer to take a statement”.

In a week in which Moshoeu’s alleged killers, Phillip Schutte and Pieter Doorewaard, were granted R5 000 bail apiece and four farmhouses torched, the situation remains tense in this farming town.

North West community safety MEC Dr Mpho Mothlabane, although skidding around the question when directly asked if he was aware of this allegation, confirmed that upon hearing of this matter, he called the provincial police head office, and a senior brigadier was assigned to investigate the case.

The police told SABC that the case was initially treated as an inquest, as the farmers could not be arrested for a case the police were investigating. They also denied they were protecting farmers at the expense of the town’s black residents.

EFF members alleged that the police were heavily biased towards the white farmers. “If you go to the townships and villages in this area, you will notice that there are police nyalas all over, but none whatsoever in black areas.” This allegation was corroborated by the show host, who said the SABC crew, upon arriving in town on Thursday noon, made the same observation.

Pieter Groenewald, the leader of Freedom Front Plus, defended himself against EFF commander-in-chief Julius Malema’s tweets earlier this week. Malema had tweeted that Groenewald had said his organisation would pay for private security to protect farmers in the violence-plagued town.

“They have a right to security as they are attacked. I am a politician. I don’t know how many got private security and how much they are paying,” he told Morning Live’s host Palesa Chubisi in a heated debate. After being confronted several times on whether he tweeted what Malema said, Groenewald accused the media of creating a false impression about the situation in Coligny.

“Just like the police are saying, you are making it look as if racism is only from white people,” he told Chubisi.

An ANC representative said the issue ran deeper than just protection of white farmers by the police. He told Chubisi there was a cosy relationship between the police and farmers, with many black people in the town too disillusioned to report cases of racism, as they were generally turned away.

Meanwhile, the Mail & Guardian is reporting that “prosecutors pursuing a charge of murder against the pair accused them of throwing Matlhomola off a moving bakkie and beating and intimidating the only witness who came forward to implicate them in the murder”.

ANC North West to discipline councillors who voted for EFF mayor, speaker
5 days ago
5 days ago

ANC North West to discipline councillors who voted for EFF mayor, speaker
5 days ago
5 days ago