Malema: When Zuma is not ‘stealing’, he is getting married 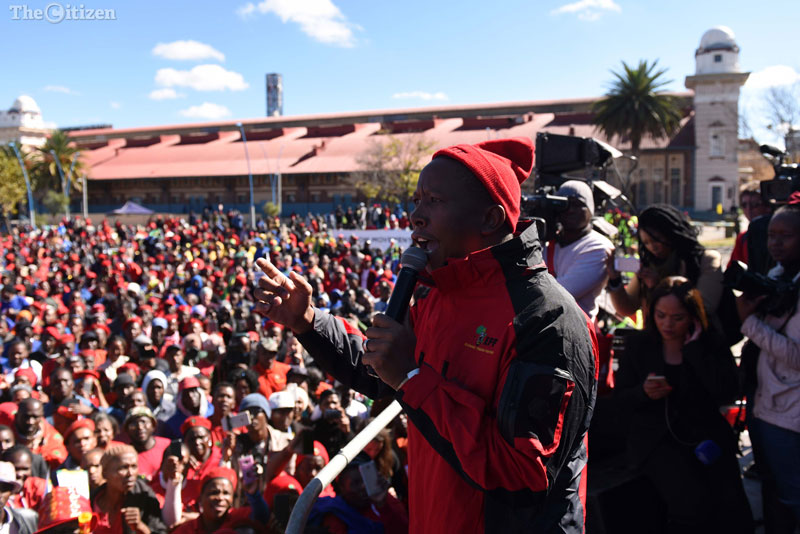 A multi party march from Braamfontein to the Constitutional Court, 15 May 2017 in support of a secret ballot vote of no confidence in President Jacob Zuma. Picture: Neil McCartney

Following the secret ballot case at the Constitutional Court on Monday, politicians have shared their thoughts on the matter, also predicting the outcome of the case.

Addressing the crowd outside the court last night, EFF leader Julius Malema thanked the masses who came out to support the multiparty march from Braamfontein to the ConCourt in support of the secret ballot.

In high spirits, Malema said though the judgment was reserved, they “are going to win this”.

The EFF leader said parliament had agreed there was no harm in a secret ballot, further threatening a national shutdown on the day of motion of no confidence in President Jacob Zuma, in support of the ANC MPs to help them make the right decision.

“How can we be a normal society when the president can’t think? When he’s not stealing, he is getting married,” he said.

In fact, though the ANC has hopes of taking back the metros in the 2019 elections, Malema said it had it all wrong. Gauteng would be under the leadership of the EFF in 2019, he said.

“Our national chair closed on an exceptional note. He’s called the people’s advocate for that,” he said.

According to him, it was Zuma’s counsel who was embarrassed on national TV for protecting the president.

“Putting a case where there’s no case will embarrass them,” he said.

Even EFF deputy president Floyd Shivambu reiterated Malema’s sentiments that the ConCourt would rule in favour of the secret ballot.

But president of the Progressive Professionals’ Forum (PPF) and Zuma supporter Mzwanele Manyi said Shivambu was dreaming when he said the ConCourt would rule in their favour.

“It won’t happen. UDM and all of them failed to convince ConCourt on a simple principle. How can discretion be a court order?” he asked.

Perhaps he should take a few lessons from the EFF leader, who responded to the criticism, saying politics was his “thing”.

“I don’t deal with the obvious – that’s for social commentators, not for strategists. We deal with unforeseen circumstances,” he said.

The case brought by United Democratic Movement (UDM) leader Bantu Holomisa in the Constitutional Court to have speaker of parliament Baleka Mbete allow a secret ballot when MPs vote on the no confidence motion in Zuma was heard on Monday.

Holomisa’s court bid comes after the president’s Cabinet reshuffle in March, which saw then finance minister Pravin Gordhan and his then deputy, Mcebisi Jonas, being sacked.

The speaker has previously argued that the rules of parliament did not provide for a secret ballot, though legal experts have disputed this.