Seven victims at University of Pretoria in nine months and no action yet, say students. Woman's underwear suspended on a rope while students protest in the nude against rape on campus at the University of Pretoria, 16 May 2017, Pretoria. Picture: Jacques Nelles

About 100 female students at the University of Pretoria (UP) yesterday protested topless against rape and sexual harassment on campus and between campus and their residence.

They said several students had been raped on campus over the past nine months and another was sexually harassed over the weekend.

Yesterday’s protest was the start of the “UP safety is a lie” campaign, after a number of rape cases had been reported to university management but were allegedly never addressed. Students protest in the nude against rape on campus at the University of Pretoria, 16 May 2017, Pretoria. Picture: Jacques Nelles

Representing those standing against the abuse of women on campus, Lolla Ngobeni said last year they held a symposium after the Are We Safe campaign and a memorandum was handed over to management.

“No one did anything and it’s nine months later and there are seven victims,” Ngobeni added.

UP spokesperson Rikus Delport said they were not aware a memorandum had been handed over to the university, but that management had engaged with students last year to improve awareness as part of a campaign against sexual violence, and it would be repeated this year.

Delport added: “The students who were protesting today highlighted an important social issue that affects women everywhere. The University of Pretoria condemns any and all acts of sexual assault in the strongest terms and will not hesitate to take the necessary steps against anyone found guilty of this offence.”

He added that the university would continue to look for ways to raise awareness and support abuse survivors. “The safety of our students and staff remains our highest priority,” Delport said.

Ngobeni said that some cases were not reported because the female students were afraid.

“A medicine student had to drop out in her final year because she could not face bumping into her rapist in the student centre,” she added. 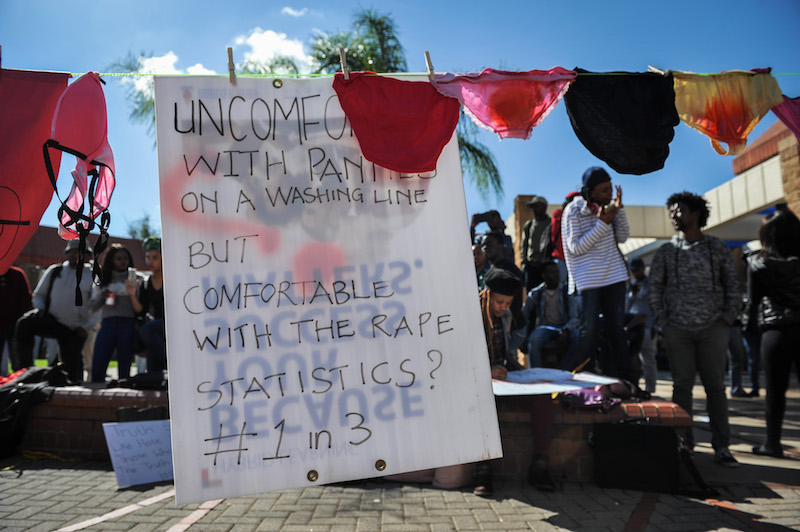 A sign hangs among ladies underwear while students protest in the nude against rape on campus at the University of Pretoria, 16 May 2017, Pretoria. Picture: Jacques Nelles

Harassment victim Leila Hlongwane (not her real name) said she was sexually assaulted in a male residence two months ago when she went to look for a friend.

“I was fortunate as I was able to fight him off,” she said.