Animals placed under care at Tuks as Nehawu protests continue

Nehawu members joined the protest again on Monday at the entrance of the university. 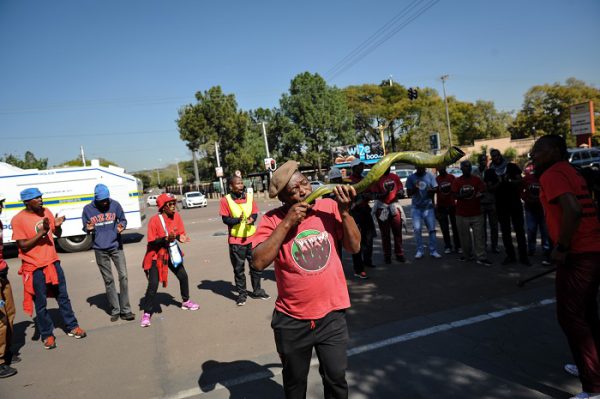 Demonstrators protests outside the University of Pretoria where Nehawu members and workers at the institution have gathered to protest regarding their annual increases and bad working conditions, 19 May 2017, Pretoria. Picture: Jacques Nelles

The University of Pretoria has put contingency measures in place to ensure the well-being of animals at the Onderstepoort Veterinary campus, in north of Pretoria, while the protest by the National Health Education & Allied Workers Union (Nehawu) continues at entrance to the engineering section of the university.

On Monday, Nehawu members, including members responsible for looking after the animals, joined the protest again at the entrance of the university despite a interdict preventing them from being within 50 metres of the university.

University spokesperson Rikus Delport told The Citizen the strike would probably continue until the negotiations had been resolved. “Classes are continuing as usual. The university will not permit any disruptions to the academic programme,” Delport said.

He added salary negotiations had deadlocked after the union refused UP’s offer of a 7% general salary increase effective March 1, 2017, as well as an additional R3 000 gratuity payment.

“The matter was then referred to the CCMA, who issued a certificate of nonresolution, which permits the union to embark on a protected strike,” Delport said.

Nehawu national organiser Ntsako Nombelani said they were continuing with a peaceful protest even though the university interdicted them on Friday not to protest within 50 metres of the university.

“We have send in a negotiating team of four representatives to negotiate with management to protest in front of the engineering gave because if we move 50 metres away, we will be standing in the street blocking the traffic. We asked them to allow us time to negotiate with the university, and they agreed.

“We are also going back to the drawing board, and we have elected four members to reinforce the negotiating them. We believe we are on strike to come back to the negotiation table. We don’t want to strike forever, and we don’t enjoy striking,” he said.

Nombelani said CCMA tried their level best, but management did not want to move because of their arrogance.

A number of SAPS officers are keeping an eye on the protesters.