The problem with Africans is self-hatred and self-rejection – Malema

Malema has told his supporters what Africa Day means to him and the EFF. 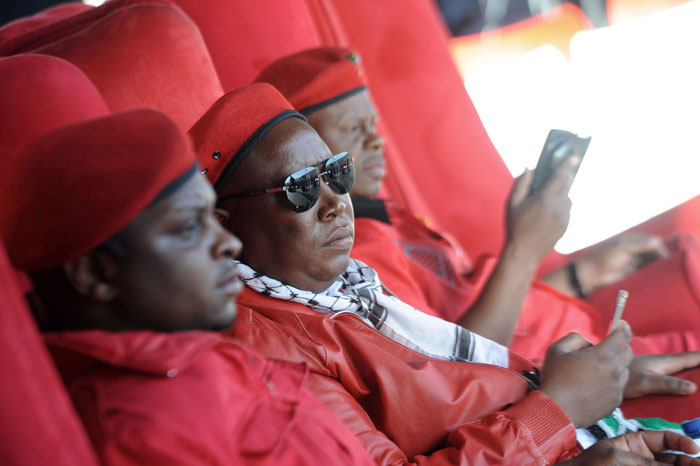 Julius Malema has told his party supporters during Africa Day celebrations in Joubert Park, Johannesburg, that if Africans “unite colonialism will never succeed”.

“They [colonisers] divided Africa not because they loved Africa, they divided us because of the resources of Africa.

“Let me tell you I am not scared of colonisers. I am scared of capitalism; it was capitalism that attracted colonisers to divide Africa,” Malema said to his supporters.

“The rejection of other Africans is self-hatred and self-rejection. If you know who you are you will never reject from other Africans. We share history, culture, and all of that the imperialists have destroyed.

Malema said those who did not embrace ubuntu were not Africans.

“It is in our culture to embrace visitors. That is why we welcome white people even when we know it is not their home. They too know that they are uninvited visitors; they must behave like one and not take over our continent,” he said.

“It is important to remind them they came here uninvited but we welcomed them. We will make their stay enjoyable, as long as they respect Africans and do not see them as workers and not as things that must not be respected when when it comes to the economy. This economy belongs to the people of Africa,” he added.

“We welcome foreign investors and multinationals but they must come through our own terms. We must reclaim our land and natural resources, everything. But we will never get it as long as we are not united. [Ghanaian independence leader Kwame] Nkrumah saw this thing long before,” Malema said.

“He [Nkrumah] said it was easy to fight for political power; once they discovered there is more power to fight for, they realised that the unity of Africans was more important than liberation. We are fighting a difficult struggle. The [colonisers] have let go of political power but hold on to economic power,” he said.

You call Africans makwerekwere but white people are called investors.

On the question of land Malema said the reason Zimbabwe would never survive its land struggle was because other countries surrounding the country undermined that struggle.

“Of course Mugabe must go, but he is 100% when it comes to land. When he is alone, that land struggle will never succeed. Other countries must take their land. They will have nowhere to go, we will control them under the dictatorship of the proletariat. We want them to run away from Zimbabwe and find South Africans are taking the land. What unites Africans is the question of land,” he said.

Malema then turned to the question of service delivery.

“Few Africans who have survived and succeed don’t treat fellow Africans with respect. We must provide each other with services. Should I give you an example? There is a guy called ANC, he doesn’t give quality services, he gives white suburbs quality services but gives black people cheap services. They too deserve quality,” he said.

He then addressed his supporters on the question of xenophobia.

MORE: Malema: If you don’t know how to propose, don’t blame Nigerians

“There is no Somalian who closed down South African spaza shops. Spaza shops were closed down by the introduction of Pick n Pay and Shoprite. When you see them [supermarket retail companies] coming to the township owners [of spaza shops], we must demand we will let them open here if they give us 40% share, otherwise there will not be Pick n Pay.

“Your spaza shops collapsed after Pick n Pay. They are helping you because they are renting your empty space. A white man said had we known democracy was going to be this nice, we would have given it to you before 1976. We are making more money now than we were making under apartheid,” he alleged.

“So-called democracy has opened doors for white people to be more rich. You are fighting for stupid things yet you go around saying they [Somalians] took your jobs. They know poverty and know every cent counts. Nature doesn’t allow a vacuum. Go sell makip-kip if you want to sell them, stop fighting for useless things,” he warned.

He further told his supporters that “the person who took your jobs is a white man who built a big mall. Everywhere I go, villagers are saying to me we need a mall. They think malls are sold; I must buy it and bring it there. They can get together and build a mall the same way they built schools with their own money during apartheid. Why not put money and build a mall? When they say they need a mall, they mean call a white person to come open a business there.”