R3.4bn newly built dam filled to capacity, but residents have no water

The De Hoop Dam was opened with much fanfare by President Zuma in 2014, but lack of expertise means taps still run dry. 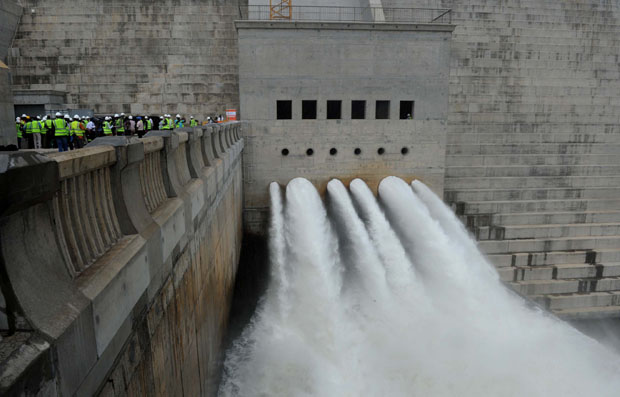 The De Hoop Dam, situated in the Sekhukhune district of Limpopo – opened to much fanfare and promises of reliable supply of clean fresh water to residents of this rural part of the province by President Jacob Zuma shortly before the 2014 national elections – is probably the only dam in the country filled to capacity.

But the reason De Hoop is filled to capacity is not because the area has been experiencing above-average rainfall. The reason is simply that the municipality allegedly lacks the technical capacity and operational management to supply villagers in the district with water, and so the dam stays full.

Shortly before it was opened in 2014, Vuku’zenzele, a government publication produced by GCIS, reported that “walking long distances through thorny bushes in order to access clean water will soon be a thing of the past for thousands of people residing in the Sekhukhune District in Limpopo, thanks to the opening of the De Hoop Dam”.

The district municipality experienced a health scare in 2013 when borehole water most residents rely on was found to be contaminated.

Municipal spokesperson Willy Mosoma explained to The Citizen that the municipality was struggling with pipeline reticulation to nearby villages. The district council has also not formed a water management authority to manage the dam in terms of legislation.

During the 2015 state of the district address, the executive mayor, David Magobo, proudly told residents the De Hoop Master Plan had been completed.

“And we are pleased to announce that, working together with the department of water and sanitation, thirty eight (38) houses of  residents of Buffelskloof” who reside within the dam area have been connected to the dam’s main supply pipeline.

The dam, which cost government R3.4 billion to complete, involved innovative solutions in energy dissipation and the use of roller-compacted concrete, for which the department received a Fulton award.

During the 2016 state of the district address the executive mayor told residents that “it is scientifically proven that the Sekhukhune District Municipality heavily relies on groundwater for its sustenance, a source which is not reliable at all”.

“Hence we are elated that on the 2nd April 2016, Minister of Water and Sanitation Honourable Nomvula Mokonyane donated two mobile water packaged plant trucks to us a part of the relief measure,” he told residents.

Residents were not given any updates on the supply of water from the dam, with the municipality saying only “we [the municipality] appreciate the commitment by the honourable minister to allocate us with additional mobile packaged plants to be allocated to other local municipalities”.

On the 24th of March 2017, new district executive mayor Keamotseng Ramaila told residents during his state of the district address that one of his six mayoral priorities was “provision of water and sanitation services in a sustainable manner”.

He further told residents that, in 2011, the district council approved money “towards bulk water infrastructure”.

“And as such, we have continued to engage on this trajectory knowing fully well that, in the meantime, some people will encounter challenges, while others will continue benefiting from the existing reticulation systems in their areas.

MORE: Over 20 initiation schools shut down

“And ours was a conscious decision that embraced long-term and sustainable means of water provisioning with a view of efficient utilisation of the limited public resources at our disposal,” he said.

He then told residents they were using the “Water Master Plan as our guideline towards planning and implementation of water and sanitation projects”.

To alleviate the problems, he announced that “66 pump operators have been appointed as general workers and we are in the process of appointing 25 before the end of this financial year”.

He told them that the municipality was “currently enjoying support from provincial and national government”.

But despite all these promises, close to 800 000 residents in the district still sit without water.