The health minister opines that the push factor is simple: the collapse of healthcare in some African countries. 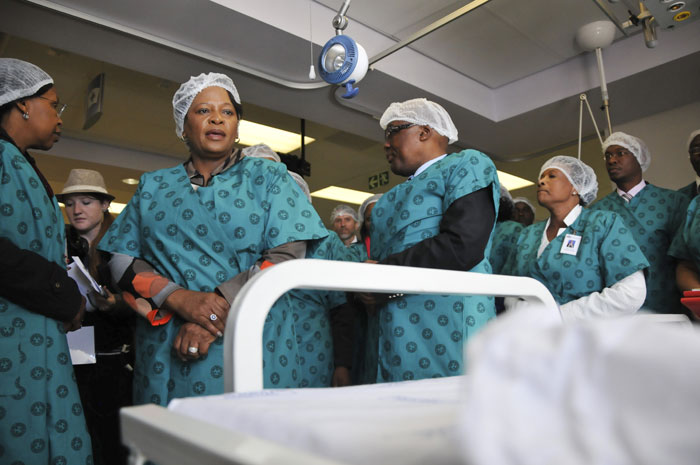 Minister of Health Aaron Motsoaledi (left) and Gauteng Premier Nomvula Mokonyane (Right) prepare for a tour of the hospital,30 April 2014, at the launch of the Zola-Jabulani Hospital in Soweto. The Hospital costing about R750 million is aimed to alleviate pressure on Chris Hani Baragwanath Hospital and will service, the northern and western parts of Soweto. Picture: Alaister Russell

The collapse of the healthcare systems in most African countries is choking South Africa’s healthcare allocation.

Health Minister Aaron Motsoaledi said that on Wednesday morning when denying allegations that a Democratic Republic of Congo asylum seeker was turned away by three different hospitals in Gauteng, which resulted in her giving birth at Gautrain Park Station in the Johannesburg CBD.

The minister said that at some point former finance minister Pravin Gordhan asked to be schooled on why Gauteng hospitals often over-expended their operational budgets. He agreed to help Gordhan understand.

“I could only take him to Steve Biko Academic hospital here in Pretoria because it is closer [presumably to Union Buildings], and he attended management meetings there,” he explained.

During the course of the meeting, Gordhan was taken to the labour ward, where “the majority of the patients were foreigners”. Motsoaledi said that had huge financial implications for the system.

According to Motsoaledi, quarterly statistics from the three hospitals accused of turning away the woman, whose baby eventually could not wait for the commute to Edenvale Hospital, indicate that 47% of those who received healthcare were African refugees.

“At Charlotte Maxeke alone during the month of May, 57% of those who received healthcare were foreigners,” he said, and explained that the push factor was the collapse of the healthcare systems in those countries.

The patient in question had received healthcare treatment in the Western Cape, and continued to receive the same services when she relocated to Gauteng earlier this year. Before the miraculous birth at the Gautrain station, the minister said she was attended to at Sammy Marks Clinic in the Pretoria CBD.

At the time of the birth, the Gautrain spokesperson said the woman was assisted by employees of the company, and when paramedics arrived, they declared she had naturally given birth to a healthy, bouncy baby, which brought joy to staff and passengers.

And by her own admission to nurses, and in contradiction of The Star and Pretoria News, Kalala appeared to have been petrified at the idea of a caesarean-section birth, and told a Pretoria hospital midwife she preferred Edenvale Hospital because it was “nice” there when she previously gave birth naturally.

Nehawu calls for Nemutandani's head at HPCSA
1 week ago
1 week ago
PREMIUM!

Nehawu calls for Nemutandani's head at HPCSA
1 week ago
1 week ago
PREMIUM!